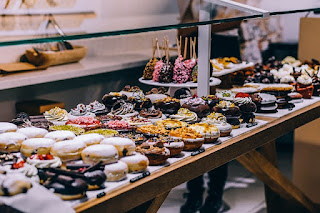 "It's awesome of you to do this for me, Ronnie," Cassandra said as they walked down the street.

"No worries," he replied with a casual shrug. "Thought you should get to know this place in case you wanted to stay here… even if you are a country girl and I'm not sure you'll like it much. Life here is cool, but real different from life in Catalpa Valley so…just takes some getting used to."

"I was born in the city, so I'm technically a city girl," she said, trying to keep the bitterness out of her voice.

Peering into a bakery display window where an adorable Snow White and the seven dwarfs birthday cake stood front and center, she smiled. "That is so cute! When I was little I remember having something like that… maybe my fifth or sixth birthday I think.  I even kept all the little plastic figures and played with them for years…might even still have them somewhere… back home," Cassandra cleared her suddenly tightening throat and added, "I'm shocked there isn't a swarm of indigent feminists picketing this place. Isn't Snow White one of the unforgiveable sins?"

"Aren't you thinking of the unforgivable curses from Harry Potter?" he said, feeling himself get hungry drooling over all sorts of amazing looking baked goods around the offending Disney cake. "Let's go in. I'm a-wanting a snack."

She giggled and followed him in. Half an hour later they came back out carrying a large box of goodies, heading back home. Ronnie was devouring a sumptuous chocolate covered, cream-filled donut and Cassandra nibbled on a crumb topped blueberry muffin almost as big as her face and sill arm from the oven.

"Wow, this is so good! I could eat a dozen of these and not get sick of 'em. Wanna bite before I eat the whole thing?" Ronnie asked, holding the last piece out to her.
She giggled as she shook her head. "Don't know what you're missing, Cass!"

"I know this is delicious and I won't be able to finish it, it's so big," she replied.

"So…you didn't answer my question," he said, popping the last bit into his mouth. "You are the tourist today and I'm your tour guide, so what would you like to see?"

She said nothing as she nibbled on the muffin.

"Come on, Cassie," he urged. "Gotta be something you're curious about. MOM, Grand Central station, Statue of Liberty…"

"Oh, sorry," he said. "It stands for museum of modern art. I just leave the last A off. Sorry. Um… It's really awesome even if you're not that into art."

"Oh," she shrugged and after a while said, "You'll think I'm stupid."

"No I won't!" he said. "Don't tell me…Chinatown?
Everybody wants to see Chinatown."

She shrugged again. "That would be nice, I guess, but…" she mumbled.

She turned to look at him, her eyes wide and a little sad. "Is…is Little Italy far?"

He smiled. "Of course, you'd want to see Little Italy. You're Italian…makes perfect sense," he said.

"I'm half Polish too. Is there a little Poland, too?" she said, an unusual snarkiness to her voice.

"I betcha there is, though I don't know for sure. I know there's a Little Moscow or Russia or something," he said. "Come on then. Let's drop these off at the apartment and go on down there."

"You know how to get there?" Cassandra said, stunned.

"We'll take the subway," Ronnie said, grinning. "You can get anywhere you wanna go from there. Besides, everybody wants to try the subway too…once."

It was as they were leaving the apartment again that Cassandra said, "Shouldn't we leave a note for Sophie, so she knows where we are?"

"If you like, but I doubt she'll care," he said. "Didn't she say she was spending the day with her Richie Rich boyfriend?"

"Did she? I thought she was going shopping?" Cassandra said.

"Yeah, with him," he said, pushing the down button for the elevator. "Suppose she thinks he knows more about business women's fashions than my mother and me."

As they rode the elevator down she asked, "Ronnie, do you like Sophie?"

He ground his back teeth for a second then answered truthfully. "Yes… and no."

She laughed. "I think I know what you mean. She can be a selfish, annoying pain in the butt one minute and totally amazing the next," she said.

"Mostly a selfish, annoying pain in the butt, though," he said.

Cassandra laughed. "But," she continued cautiously. "I get the feeling you like her…still like her like you did back in high school and maybe you're a bit jealous of her friend?"

Just as Ronnie was about to answer that, his cell rang and they stepped out of the elevator.

"Why? What's up?" Ronnie said, holding an arm out to prevent Cassandra from going out the door into the street.

"Kid's got a flu bug so we had ta come home early," he grumbled. "Not that I mind too much. I can only take my wife's family for so long before I wanna blow my brains out. She's not there anymore to run interference. Ya know what I mean?"

Ronnie laughed. "Yeah, I hear ya," he said. "Must be tough, going to your in-laws without your wife."

"Tough enough going when  she was alive. Now I'm used to it. Anyway, since we're home now, thought I'd get started on your friend's search for her mom," Tom said. "So any time you wanna bring her by…"

"Awesome!" Ronnie said. "We were just heading down to Little Italy. We'll take a slight detour and be in the Village in about twenty minutes."

"Thirty at this time of day. Who's we? Your brother witcha?" Tom asked.

"Yeah, thanks so much, Uncle Tommy. She's really anxious to get started," Ronnie said. "Um, Stacey feeling any better? I can bring her some witch's brew that Simon made from Gramma's recipe for a magical miracle cure all. Works great when you feel like crud."

"She sure feels like crud," Tom said. "Bring it. Catch ya soon!"

Ronnie stuffed his cell back into his pocket, grinning at Cassandra. "Change of plans. There's some of Simon's potion left, right?"

"Yeah, about a quart in the fridge," she said. "So… we're going to see your Uncle Tommy instead?"

Ronnie pushed the elevator button to return to the apartment. "Not instead. We'll go to Tommy's place first. He lives in East Village. It's on the way and it won't take long. After you talk to him we can go to Little Italy. Hey, maybe he'd like to join us. We can have dinner there. I can almost taste the strombolis already."

Cassandra was a bundle of nerves as they rode the subway. This did not go unnoticed by Ronnie. He grabbed her hand and squeezed it reassuringly.

"It's just a train underground going full speed in the dark," he said with a careless shrug. "What could go wrong?"

She tried to smile, but it came out as a grimace.

"It's not the subway making you nervous, huh?" he said. "Please don't worry, Cassie. Just tell Tommy everything you know and he'll handle the rest, okay?"

"That's just it, Ronnie," she said, trying to avert her eyes from the guy sitting across from her who was picking his nose while loudly singing along to a song only he could hear. "I don't have much info. I left before I could get anything out of my… from Frankie. He said he would tell me everything but…I couldn't deal with him or his bullshit and I stupidly left without even… I don't even know what your Uncle Tommy would need."

Ronnie sighed. "We'll talk to Tommy first, then he can tell you what would be helpful to him. Maybe, you could have your…Frankie could fax over whatever he has…like your birth certificate and stuff like that. Do you know your social security number by heart?"

She nodded. "I know Frankie's and my fath…my grandfather's too. I had to fill out tons of paper work for both of them so I know them by heart, too."

"Great, you'd be surprised how much you can find out about a person just from their social," Ronnie said, looking up. "This is our stop. Hold on to me so we don't get separated in the shuffle."

Cassandra hung on for dear life and not because she was fearful of being assaulted by the man who had been leering at her almost the entire ride. Ronnie may very well be the only one who understood how desperately she wanted to discover the truth of her birth mother and as far as she could tell, Tommy was the only one who could find her.

Posted by Glorygarden@msn.com at Monday, February 18, 2019

Email ThisBlogThis!Share to TwitterShare to FacebookShare to Pinterest
Labels: The Only One