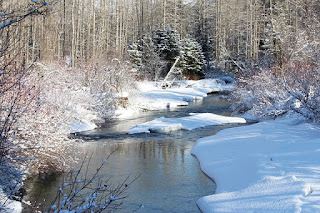 Victor stopped the car, put it in park and turned it off. This would have been a perfectly fine thing to do had not he stopped in the middle of the road and in front of his nosy and extremely annoying neighbor, Paul Dermer, who at present was inconsiderately shoveling snow out of his driveway and into the road.

He, Paul Dermer that is, stopped mid-shovel and motioned Victor to roll down his window as he obviously had something insightful to say. "Hey there, neighbor," he touched the brim of his fur-lined, ear flap cap and nodding to Violet. "Got yourself a bit of car trouble, do ya? Them fancy cars will do that. Want me call down to Joe's garage for a tow?"

"No, thanks, Paul. I'm just having an aneurysm," Victor said mildly.

"That a fact? Is that serious?" Paul asked. "Hard say it could be a killer."

"If I'm lucky," Victor replied in a dull voice.

"Want me to call up old Doc Gifford?" Paul said, ever so helpfully. "He may be older than spit but he's got a good head on his shoulders…likely knows what to do about that…an-new-ism thing."

"No, Paul, I'm hoping for a quick death, but thanks anyway," Victor replied rolling the window back up, disregarding Paul who was still offering his unwanted assistance.

"Victor, are you not well? Should I take you to the hospital?" Violet anxiously asked.

"What you could do for me is not insult my intelligence," Victor said sharply.

The hurt look on her face should have been his first clue, but he disregarded that and started the car again. Instead of backing up one house to his own driveway he took a one mile drive around the long way. He would need the time to yell at his new fiancé.

"Victor, I don't underst…" Violet tried to say, but was rudely interrupted.

"You know, I should have seen this coming," he said, bitterly. "Every time I get this close to my dreams coming true you find some way of ripping the rug right out from under me."

"It was Ronnie, wasn't it? Or Simon. They told you her name and now you're using it for…I don’t know…an insanity plea perhaps. Seen many of those in my day, but I can't believe you would go this far."

"Victor, what are you rambling on about?" Violet said.

"I can't believe you would stoop to this, Violet," Victor continued. "To… to use my mother to get out of it. If you don't want marry me then just say so and don't!"

Violet bit down on her lower lip and slowly nodded. "Not engaged one hour yet and we're already fighting," she said in a tiny voice. "This bodes very ill for us. Obviously this was a huge mistake. Better to get it done now and not subject the kids to more drama than they need. You may want to take me home now."

"Do NOT put this on me, Violet!" Victor said. "You are the one making up outlandish fairytales about ghosts and spirit guides and Lord knows what other nonsense you'll toss in just to get out of actually going through with it."

"I said you wouldn't believe me," she said with a sigh. "Your boys never spoke to me about your mother and even if they did mention her in passing a few times they never told me her actual name. I'm telling you it was Richard who…"

"Stop it! Ghosts are NOT real!" he shouted.

"You truly are an idiot."

Victor suddenly stopped the car and looked into the back seat.

"No, I'm not there, Cowboy…after all ghosts aren't real, are we?"

"What the fu…" Victor muttered as he felt a sudden chill and the hair on the back of his neck stand on end.

"You actually think Violet is two-faced enough to say she loves you and wants to marry you and have your child one minute, and the next minute contrive some ridiculous story to get out of it? Really??? Come on, Cowboy, get with the program, will ya?"

A shiver ran down Victor's spine. "Richard?" he mumbled.

"Of course it's me," Richard snapped. "Got another ghost husband haunting ya?"

"What about him?" Violet said, watching him curiously.

"Are you really having an aneurysm? You certainly don't look well."

"You know, you ruined my perfectly good Welcome-to-Heaven party just cuz you wouldn't open your mind to the possibility that Violet was being truthful and honest about her being visited by your mother's ghost. Heidi would be ashamed of you."

"I must say I am rather disappointed," Heidi said with a sigh. "I spent all morning letting Violet get to know me, doing her hair and makeup, telling her my sorry life story and this is my reward. I'm not happy at all."

"Mama?" Victor said, so stunned his hands started to shake.

"Dear God, Victor, what is wrong?" Violet said, now truly shaken by his odd behavior. "Is it your heart? Please tell me!"

Victor turned to stare at her, his eyes glazed over. "He… he called me Cowboy," he said, weakly. "He's been the voice in my head before this, but…I didn't want to believe it. I couldn't believe it…not and keep my sanity."

"What are you talking about?" Violet asked. "You're not making sense."

He suddenly grabbed Violet and held her so tightly she squeaked. "I'm sorry I said those things," he muttered into her hair. "I believe you now. Ghosts are real… really real."

She gave him a skeptical look after he released her.

"Are you just saying that so we'll stop fighting?" she asked.

"No, I'm saying it because they were just talking to me in my head, your Richard and my mother! And if I'm to speak the truth, they've been talking to me for a long time…I just didn't know it was them," he said. "Now, before we go any further tell me everything my mother talked to you about and do NOT leave out a single word."

Violet waited until they were safely parked beside a babbling brook. "Where should I start?" she muttered to herself. She then smiled and turned to Victor, taking his hand. "First of all, I adore your mother and I so wish she were still alive. We would be such good friends. I just know it! She was so sweet to me and yet no-nonsense. She refused to take any guff from me...certainly put me in my place."

A lump formed in his throat. "Why do you say elegant when describing her?" he asked.

"Well, you should know! You obviously get your flair for fashion from her. She was stunning! She was wearing a beautiful Chanel suit she said you bought for her. It was in sapphire blue…almost this exact color which she said was your favorite. Not sure she meant the color or the dress, but I know you've told me that you really liked this dress before so…"

"What…what did you talk about? What did she say and do?"

"Well, she told me this was a most important day and that I had to be very careful how I dressed. So after she picked out this dress, she shoved me into the bathroom to shower. I must say it was a bit off-putting getting undressed in front of a ghost…no less your mother! But I figured I was only dreaming so…if I can talk to a heavily armed ex-military vamp in my dreams and engage in special ops using exploding pineapples that kill my nemesis… what's a shower in front of a ghost, right?"

Victor couldn't quite picture what she said, but he nodded for her to continue.

"So, while I showered and she did my hair and makeup she told me about…gosh, I'm not sure she would want me to tell you this. I mean…she didn't tell you herself so…but she wouldn't have told me if she didn't want me to share it with you, right?"

"I couldn't say," Victor said, frowning slightly. "If this is your way of getting out of totally and completely convincing me this was in fact my mother speaking to you and not just some person pretending…"

"Honestly, Victor, how many ghosts do you think I know?" Violet said, utterly miffed.

"Violet, this is hard enough for me to believe without … just tell me what she said, please."

"Heidi told me you knew of her gentleman friend, Mikhail?" she said and at the stunned expression on his face she smiled. "She didn't, however, tell you she had fallen in love with him and that he had asked her to marry her…several times in fact. Sound familiar?"

"Are you serious?" he said. "My mother and Mikhail… in love?"

Violet nodded. "Poor Heidi, she was afraid of your reaction so she delayed telling you, but then…this is the  saddest part," she said, shaking her head. "Just as she was getting the courage up to tell you she had accepted his marriage proposal at last, she got sick. I remember you telling me it was quick and unexpected. I wanted to ask her what it was that killed her, but she was obviously still upset about it and not able or willing to dwell on it further, so I didn't ask. I probably should have to give you undeniable proof."

Victor shook his head. "Believe me…you knowing about Mikhail is proof enough. Not even the boys knew of him," he said, rubbing the spot over his heart. "Stupid of me but I never thought it was anything more than friendship. It was my fault then. She might still be alive had she told me sooner."

"How do you figure that?" Violet said incredulous.

"Don't you see? If she had already been married when she got sick Mikhail would have insisted she go to the doctor in time to save her. It was her stubbornness that allowed a curable virus to take hold and kill her. If she had just told me…if she hadn't been alone…if she…"

"Don't do that to yourself. Heidi expressly told me que cera, cera," Violet said. "She would not want you fretting about it, Victor, nor taking the blame for something that is definitely not your fault."

Victor drew a deep breath and let it out slowly. "Any other momentous revelations I should know about?" he asked, almost afraid.

Violet smiled. "Heidi told me about your sister, Anastasia, and how happy she was to be reunited with her precious baby girl and your father."

If ever there was a perfect time for an aneurysm, Victor thought, this was it.

Email ThisBlogThis!Share to TwitterShare to FacebookShare to Pinterest
Labels: The Insanity Plea