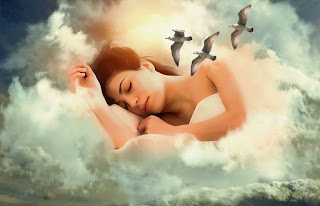 Richard stared down at Violet, fast asleep on their bed, and took in a fortifying breath. At least that’s what he wanted to believe he was doing. At this point he knew darn well ghosts didn’t require air to breathe, food to eat, water to drink or in fact anything a live person needed.

Except, perhaps, he thought to himself before he crawled in beside her, for a loving touch. How he craved that!

He smiled as he continued to gaze at Violet’s pretty face--so serene in slumber-- the only bit of her visible over the massive pile of blankets she was never without on cold, dreary winter days. He marveled that she still slept only on her side of the bed, leaving his side untouched as if she expected him to show up at any moment and sneak in beside her.

Was that consciously done, he wondered? Or was it just the way it was, more habit than anything else? Violet had always been a creature of habit. Still…he wondered.
He reached out a ghostly hand to touch her shoulder and at long last awaken her to have this most important talk, but he withdrew it. This could be it. This could be the very last time he ever got to speak to her, touch her, be with her. This encounter could break the spell which kept him bound to her. Soon he would no longer be earthbound and on his way to…where?
Read more »
Posted by Glorygarden@msn.com at Monday, May 21, 2018 No comments: 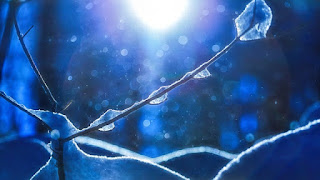 “Mom,” Kenny said, his tone gentle yet firm. “You do realize Dad is NOT really there anymore, right?”

Violet stopped stirring honey into her tea just long enough to give her son a look which told him he was walking on very thin ice and he best be careful where he further treads. That, however, was not going to stop him.

“I mean…his body is there…what’s left of it…bones and…” he drifted off when she raised a menacing eyebrow, a look reminiscent of Medusa and twice as scary. “I mean, Dad’s essences, his spirit, it’s not there anymore. It was probably never there. You do know what I mean?”

She said nothing. She sipped her tea—burning the tip of her tongue—and stared out of the window. The snowy clouds had dissipated and the backyard was now bathed in moonlight. Sparkles glistened off the snow, making the night appear far brighter than it should.

“I forgot to give you your gift,” she suddenly said.

“What are you talking about? We all opened our Christmas gifts this morning,” Kenny said. “Remember?”

“No, this is not for Christmas. It’s a family gift. That is to say, because you are now having a baby and expanding the family,” she said. “I didn’t have time to search for it. I suppose it’s in your father’s strong box with all his other important papers. I never go in there if I can help it…”