Chapter 341 Panties in a Bunch 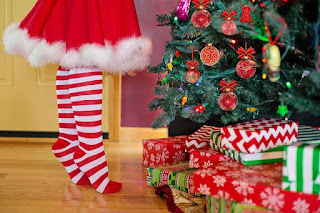 “There now,” Harmony said, taking Violet’s arm for support as they walked away from the table. “I’ve eaten enough to stuff a twenty-five pound turkey. Surely, that will satisfy Benjamin.”

Violet giggled. “You ate half a piece of toast and a tiny bit of quiche. Hardly enough to stuff a Cornish game hen…a very small one, too.”

“I need to keep my girlish figure, don’t I?” Harmony replied.

“You practically look like a teenager, Mom” Violet said.
Harmony smiled. “I kind of feel like one at this very moment. I should relish it,” she said. “I think, however, that I’m more like a toddler and need a nap, though if anyone makes me I will kick and scream and make quite a fuss.”

“Oh, Mom, if this party is too much for you we can go home right now,” Violet anxiously said.

“Don’t you dare suggest such a thing!” Harmony said, forcefully. “This is the first Christmas party I’ve actually participated in since forever and I will not be removed. I just need to kick up my feet for a bit. Surely there is a place in this lovely home where I can do that.”

“I think Georgiana wouldn’t mind you using her bed upstairs,” Violet said, steering her mother to the landing.
Harmony ominously eyed the stairs. “Oh dear…way up there, huh? No, that much climbing would knock me on my ass.”

“Um…okay…uh, perhaps Victor’s library? It’s quiet in there. He wouldn’t mind, I don’t think,” Violet said, although not too convincing.

“Yes, I was going to suggest you do that,” Harmony said.

“What? Bring you to his library?” Violet said.

“I mean Victor. You have yet to introduce us, you know. It’s as if you’re trying to keep us apart and ignorant of each other, but I know that couldn’t be it,” Harmony said, watching the tell-tale sign of guilt on Violet’s cheeks. “Rather naughty of you, Violet. I thought I taught you better manners than that…at least I thought I had…memories on that score are a tad mucky.”

“I…I’m sorry. I am being rather selfish keeping you all to myself,” Violet said, searching the room for Victor as she spoke. “Oh…um…he’s a bit busy right now, Mom.”

“Yes, I see that,” Harmony said watching him across the room speaking to a leggy blonde bombshell. “Don’t tell me. That’s his ex-wife, isn’t it? Which begs the question what in the world is she doing here? You won’t catch me dead near my ex.”

“They have a very civilized divorce. It used to be contentious, but they get along pretty good now,” Violet said, but the angry look on Catherine’s face belied those words.

“Do they now?” Harmony said with a chuckle. “I’d hate to see when they are NOT getting along.” Standing behind Violet so she would not see, Harmony waved her arms energetically above her head until she caught Victor’s eye. “Now, why don’t you take me to this library? He should finish up with his lovely former wife soon enough and perhaps join us there.”

“I can rest and still talk to a good looking guy. You were not kidding about that, were you?” she said with a sly smile. “He’s dreamy enough to make me forget Benjamin. Let’s go, Violet.”

Violet did as she was told without comment, all the while wondering what was getting Catherine’s panties in a bunch this time.

******
Victor had been wondering why Violet had been systematically ignoring him at his own party. He was the host after all and ought to be introduced to every person here and yet Violet’s manners had not kicked in. What was up with that? Ah, well, he knew very well why. She hadn’t seen her mother in such a long time and having her alive and out of her catatonic state…well, who could blame Violet for forgetting everything else? Yes, he would forgive her this one slight. Let’s face it, he’d forgive her anything… perhaps. It had been the case not too long ago. Things can change with time as we all know.

Just as he was about to make his way toward Harmony Norton, heading toward her and Violet as they exited the dining room with the expressed purpose of introducing himself, out of the corner of his eye he saw a flash of agitated blonde ambition and he involuntarily paused.

“Oh, crap… now what?” he muttered as he saw Catherine lugging her fussy baby in a carrier to the bar, place her on the shined-to-a-mirror-finish surface and pour herself a drink. He abandoned his initial desire and went to his ex-wife, already suspecting the reason for the annoyed expression on her meticulously made up face.

“Merry Christmas, Catherine,” Victor said, now speaking to the baby. “And how is baby Andrea doing on her very first Christmas morning?”

“Peachy,” Catherine said, downing an inch of Dewars, before refilling her glass with another.

“I see Andy is not here with you. What a pity,” Victor ventured cautiously, now removing the baby’s knit hat and unzipping her quilted bunting.

“Yes, he was on call, so we made the most of our morning, opening presents and enjoying the peace and quiet until some person, surely driving over the hills and through the woods to gramma’s house, had the misfortune of running into Bambi’s father on the highway. According to Andrew it had a truly nice rack. He sounded rather envious to me as if he wished he’d have been the one to run into it. He said now they’ll have something really special to bring to Gramma to fill the freezer. Hicks love their venison, don’t they?”

“You seem to forget that you and Andy are both hicks, born and raised in Catalpa Valley and its environs,” Victor said, smirking at the baby. “And so are you, little Andrea. Yes, you are!”

The baby gurgled and laughed.

“You’re only a hick if you act like one,” Catherine snapped, downing another drink.

“Are you all right?” Victor asked.

“I was until Morris told me about Ronnie’s Christmas gift. How could you without even consulting me?” she said angrily.

“It was not my doing! Morris insisted because he likes the boy and he wants Ronnie to be able to return home whenever possible and he’ll need something other than my truck which doesn’t fit very well in the parking garage at the apartment as you well know.”

She sputtered on her third drink. “Since when is he…wait, he’s going to live in the City, in the apartment? Your apartment?”

“What other apartment is there?” Victor said, wiggling the finger which Andrea had wrapped her fist around.

“But…did he apply to NYU or Columbia or Fordham? He didn’t tell me. Was he accepted?”

Victor sighed. “This is getting ridiculous, how he always leaves it to me to break things to you.”

“What things?” she said.

“Ronnie is not going to school, Catherine.”

“His feelings have nothing to do with this!” she shrieked.

“Catherine, take it easy. He has a job offer, he wants to work in the real world and he’s very excited about it,” Victor said, trying to calm the now fussing baby. “I think she’s too warm. Here, hold the blanket while I take her suit off.”

“What in the world is he thinking? Bartending is not the real world nor is it a suitable profession!”

“Actually, it is for many people, but you just don’t want it for your son. Reflects badly on you, you seem to think.” Victor said. “For the record, this job is not bartending. He won’t tell me what it is exactly, but he says it has potential for more and he’s willing to try whatever pops up. He’s trying to find himself.”

“Find himself??? That’s just code for ruining your life, for doing absolutely nothing with your life until you end up a bum on the streets begging for coin. And you’re perfectly okay with that for your son? Some father you are!” Catherine bellowed.

“Yes, come here, little one,” Victor said, cradling the baby in his massive arms. “Your Mama is upset is all, because one of her fledglings has left the nest and not done her bidding…you may as well get used to it now. She’ll soon be on you to get in the best preschools and prep schools, and my goodness, she’ll even pre-register you for college courses before you’re out of diapers…you poor dear.”

Catherine’s anger slowly ebbed as she watched how her little one became so happy in Victor’s embrace and a hollow feeling filled the void. “You were always so good with babies,” she mumbled, mostly to herself and without thinking she added, “Might we still be together had we had a little girl?”

“What?” Victor stammered, stunned and befuddled. “Recall, Catherine, it was you who divorced me, so only you would know the answer to that.”

Seeing the guilty expression on her face he sighed. “Catherine, please don’t. Water under the bridge at this point, hardly worth reliving. I know now why you married me and I'm fine with it. I was perfect on paper, perfect enough to please your father and when he died, you no longer had to pretend. Your first true love was waiting all that time in the wings and….”

“Lest you think otherwise, Victor, I did love you,” she insisted.

“Yes, well, I’d like to think so, but it hardly matters now, does it?” he said kissing the tiny baby before handing her over to her mother. He glanced up and saw Harmony waving madly at him making him grin. “Now, if you’ll excuse me, I have other guests to attend to. Merry Christmas, Catherine. There are a few gifts under the tree for you, Andy and the baby. Ask Georgiana to get them for you. Okay?”

Catherine watched him go and shook her head. “Why does he have to be so damned nice all the time?”

The baby gurgled in reply as if to say, “I like him.”

Email ThisBlogThis!Share to TwitterShare to FacebookShare to Pinterest
Labels: Panties in a Bunch