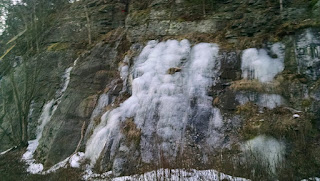 “So…um…we’ve got a bit of a hitch,” Freddy said, going for casual and missing the mark by a mile.
“Hitch in what?” Victor said, popping a grape tomato into his mouth, washing it down with some scotch.
Freddy grimaced rubbing the back of his neck—a tell tale sign he was going to impart some bad news. “Remember when I said my mom wanted to surprise everyone by showing up here at your Christmas party?”
“Of course,” Victor said, swirling the ice in his drink before taking a sip. “The party’s for her. Where is she anyway? Thought you were bringing her.”
“Yeah, well…surprise! She’s not coming,” Freddy said.
Victor almost choked on his scotch. “What?”


“I’m sorry, Vic. You went to all this trouble and we have everybody here and…”
“I’m guessing she’s just not ready yet, got cold feet. That’s understandable. Don’t worry about it, Freddy,” Victor said. “It’s not like it’s a waste of time to have a party. We’re still having fun.”
Freddy cleared his voice. “Yeah, well…if it was just that…”
“What do you mean? Has your mother’s progress been stilted or she’s regressing?”
“No, nothing like that. Exact opposite,” Freddy said, looking a bit stunned. “She’s doing remarkably well. In fact…there’s been some unforeseen developments.”
Victor frowned. “Odd behaviors? Drastic change in her personality? That’s to be expected in such a case as hers, Freddy. I wouldn’t freak out just yet. She’ll get back to normal…eventually.”
Freddy shook his head. “Normal is not likely from what I can see. Normal is gonna be vastly different than…You won’t believe this, Vic. Right now, she’s at a Hanukkah party…with her…with Dr. Kruger. I can’t believe it myself,” he said.
“Wait…what?” Victor said. “You never told me she was Jewish.”
“She’s not…or wasn’t,” Freddy said. “Hell, I don’t think she even knows anymore.”
“I’m lost,” Victor said. “Your mother , who never had been Jewish to this point, would rather celebrate Hanukkah with her doctor than be at a Christmas party with her own family? A family she hasn’t seen in…decades?”
“I know…it’s crazy, but…she says she’… in love,” Freddy said, shaking his head. “They are in love.”
“With Dr. Benjamin Kruger???” Victor shouted. When several people looked over at them he lowered his voice. “Are you fricken kidding me? Your mother fell in love with her doctor… a married man I might add?”
“Uh…no, he’s widowed, some five years or so she told me,” Freddy said.
“Are you sure? The man was always talking about his wife…thought for sure she was alive by the way he spoke of her,” Victor said.
“Sounds familiar, don’t it?” Freddy said. “Violet’s the same way.”
Victor gaped at him. “And um… how do you feel about that?” Victor asked cautiously. “Your mother in love with someone other than your father?”
To his surprise Freddy grinned. “I think it’s great. About time she had some fun in her miserable life.”
“Violet, I imagine, might feel differently. So, when do you think your mother might be ready to show herself to her family?” Victor asked.
“Willing to have a New Year’s party to find out?” Freddy asked.
Victor laughed. “Sure! Why the hell not?”
“I wish she could be here tonight to meet everyone. I’ve been dying keeping this a secret from everybody…especially Violet. She’s gonna kill me when she discovers how long I’ve been lying to her.”
“Where is Violet anyway?” Victor said, looking around at all the people enjoying themselves at the party. “Haven’t seen her all night.”

Email ThisBlogThis!Share to TwitterShare to FacebookShare to Pinterest
Labels: Christmas and New Year, Hanukkah, too