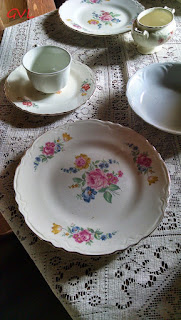 “The thing is, Simon,” Violet said, drawing in a deep breath before biting her lip. “It wasn't really an escape so much as it was...um... actually, my father kicked me out of the house.”

Simon choked on his tea. “Your father kicked you out of the house?” he repeated. “What could you possibly have done to deserve that?”

She smiled ruefully. “Jane Austin called it finial disobedience when you went against... parental tyranny,” she said shrugging. “He found out about Richard and...”

Simon blinked, his mouth agape. “Are you kidding me? Your father kicked you out because you went to a football game with a boyfriend, the same guy you eventually married?”

“Oh, that was just part of it. My father didn't think Richard was good enough for me, but it was a bit more than that...quite a bit,” she said evasively.

“I'm sorry, but sneaking out a few times to see your boyfriend is not enough to get you kicked out of your house. Surely it wasn't permanent?”

“You would think so, but yes, it was,” she said. “You couldn't imagine it because you have parents who practice unconditional love. My father did not...I discovered.”


Simon stared at the sad expression on her face. He could tell she still felt the blow even after all these years. His incredulity swiftly gave way to anger. “Not much of a father then, was he?”

“He was in his own way. He loved me. He was trying to protect me and when I didn't do as he wanted... well... I should have listened to him I guess,” she said, frowning. “Of course if I had, Richard and I never would have gotten together.”

“So, what you're saying is Cassandra did exactly as you did. She disobeyed her father to be with me so...so what? Her father is justified to kick her out?” Simon said, a puzzled expression on his face. “Violet, how the hell did you ...wait, where did you go... when your father kicked you out? You didn't have to live on the street or anything!”
She laughed and shook her head. “No, not at all. We stayed at Richard's house. His parents were very kind to us and as Freddy was like a third son to them anyway and then when they met me, well, they kinda loved me straight away just because I was Freddy's sister plus I was Richard's girlfriend. Course they probably felt sorry for us too. They helped us get married as soon as possible, and since Richard's brother was killed in the war a few years previously they said we could use his basement apartment to live in until we could afford our own place and Freddy stayed in Richard's old room,” Violet said. “It was actually really nice to have a real family again.”

Simon gave her a perplexed look. “Are you saying your brother lived with Richard's family?”

“Um...yes, didn't I say that? Freddy left, too... when our father kicked me out. He was so angry, he said he would never forgive our father for what he did to me. I never had seen him like that... we just packed up and left. Our father never talked to us again...even though I tried several times. He moved away soon after that. Freddy and I, apparently, were the only things keeping him in Catalpa Valley. Seems we did him a huge favor disobeying him and consequently setting him free of his parental obligations...imagine that.”

Simon stared at her speechless.

Violet forced a smile. “Would you like some more cake?” she said getting to her feet. Simon's hand shot out and grabbed her arm. “What?” she said, startled.

“Why did he ...your father, why did he do that to you? Seems so cruel and unnecessary.”

Violet sat back down and stared into her tea. “I... I told him I was pregnant, Simon.”
Simon gaped at her. “That makes it even worse,” he said.

“Yes. So you can see why I didn't think this would help you and Cassie,” she said. “It's not exactly Romeo and Juliet and hardly the advice I would ....”

“No, that's not what I mean,” Simon earnestly said. “Your father was scum. Sorry if that hurts your feelings, Violet, but any guy who throws out into the street his only daughter just because she got pregnant...”

“No, not because I got pregnant. Because I wouldn't get rid of it,” she said before she could stop herself. “I... I mean...”

“Wow, it gets better and better,” he said, his expression grim.

“I stand corrected,” he said, shaking his head. “Your dad's a prince.”

Violet stared into her empty cup, blinking quickly, her bottom lip caught between her teeth.

“I should get home,” she said after remaining in silence for several minutes.

“For badgering you into telling me something which obviously still causes you anguish,” he said. “I'm sorry. I didn't mean to get you all melancholy with all those bad memories of your father.”

She had just opened her mouth to deny this when Victor walked in looking furious.

“There you are! I thought you had left without saying goodbye,” he thundered.

“Sorry, Dad. Don't blame Violet for disappearing. It was me,” Simon said, releasing her hand. “Violet was giving me some useful advice...at least I badgered her until she told me what I ought to do.”

“Simon, you're not thinking of taking that God awful advice, are you?” she said in alarm.

Simon chuckled as he took both their cups to the dishwasher. “Let's just say I'll take it under advisement,” he said.

“Violet, relax,” Simon said. “I'm teasing. That's not how I roll. It would ruin everything I've worked so hard to do and it certainly wouldn't help Cassandra."

“What...what are you talking about?” Victor said.

“You should first go say goodbye to your grandmother and Morris. They're getting ready to leave,” Victor said, staring curiously at Violet as he spoke.

“All right,” Simon said. “Well, good night, Violet. Thanks for the chat. You might not think so, but it was helpful. I gained some prospective.”

After Simon left, Victor and Violet were alone, staring at each other in silence.

“Hmm...you certainly could say that,” Heidi agreed with a sigh. She moved beside her son and nudged him forward, but he remained an arm's distance from Violet.

“Come on, Violet, just tell him...tell him...something...anything!” Richard said. “This is ridiculous, you gotta see this! Just tell him you love him and be done with it, why dontcha?”

“Well, I haven't!” he said, wrapping his ghostly arms around her, whispering in her ear. “Darlin', you gotta break free of the chains that bind ya. Tell him you're sorry, tell him you love him. Take his hand and lead him up to his bedroom and I know he'll forgive everything.”

Violet shivered and stared up at Victor.

“I thought you were going to say something,” he said.

“Yes, and getting later all the time,” Victor muttered under his breath.

“Excuse me?” she said, as she tidied the kitchen.

“Nothing,” he said, watching her cleaning the counter of a few stray cake crumbs.

She dusted her hands when done and forced a smile. “Well...um, I'll go say good night to Marty and Morris.”

“Yes?” she said, turning back.

Victor frowned. “Are you okay?”

She thought on that a moment and realized she hadn't truly been okay for a very long time.

“Good night,” he replied, because to say anything else was to invite trouble.

Email ThisBlogThis!Share to TwitterShare to FacebookShare to Pinterest
Labels: under advisement