Chapter 303 How it should be 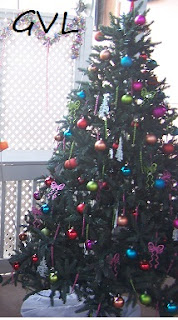 Ronnie barreling down the stairs nearly plowed over his grandmother and also Violet as they emerged from the kitchen.

“Ronnie, dear,” Marty said, offering her cheek for an apologetic kiss. “Do please use a bit of decorum.”

“Yup, I will...one of these days,” Ronnie said grabbing his boots as Marty walked away shaking her head.

“No, I'm like totally late for work!” he said, shoving his feet into the cumbersome boots.

“It's awesome!” Ronnie said, grabbing a coat, shrugging into it.

“That's as good as it gets. When you find a job that doesn't feel like work, you've struck gold,” Violet said.

“Well, it still feels like work, but it's fun too,” he said grinning and fumbling in his pockets for keys.

“Well, have fun,” Violet said, turning toward the living room.

“Violet,” he said, placing a hand on her arm.

Ronnie stepped close to her, kissed her cheek and smiled. “Thanks for being here. It's so good when you're here. We all feel it,” he said.

He backed away from the door because at that moment it burst open and Simon came in with a blast of frigid air and Sophie trailing closely behind.

“Dude!” Ronnie said. “How about not busting through the door and almost breaking my nose?”

“Then don't stand like an idiot by the door!” Simon said irritably until he spotted Violet. He then forced a stiff smile, “Violet, how nice to see you.”

“Hello, Simon, how are you?” Violet asked cautiously. The look on his face told her he would just as likely snap her head off as answer politely.

“Sure you are,” Ronnie muttered exchanging looks with Sophie who was shaking her head ever so slightly and mouthing, “No, he's not.”

“Hey, Mom, what are you doing here?” Sophie said, pulling a slouchie wool hat off her head.

“I...uh...” Violet said looking with concern at the scowl on Simon's face.

“Georgiana surely had invented something vital to talk about which only your mother could handle. Am I right, Violet?” Simon remarked, removing his coat and hanging it in the closet.

“Something like that, yes. Are you all right, Simon?” Violet asked.

“Nothing a stiff drink and a good book won't cure,” Simon said, gritting his teeth. “If anyone should ask, I'll be in my room.” And with that said he sprinted up the stairs as if the devil himself were on his heels.

“Well, we knew it wasn't gonna be great but... damn, Mr. Bellarosa can be such a dick!”

“Which only serves as an excuse for him being grumpy. Doesn't mean he had to be so rough on Simon,” Sophie said.

“I never thought I'd hear you defending Simon. It musta really been bad,” Ronnie said, glancing at the clock on the wall. “Crap, I'm so fricken late!”

“What the heck for?” Ronnie said. “I'm not singing with you, so don't even ask!”

Sophie gave him a condescending sort of smirk. “Just so you know, I don't need you to do that. I have someone else all lined up to play with me. He's going to meet me there. All I need is a ride and a ride back home if you can ever pull yourself away from your flirty fans, that is.”

“What! Who is singing with you?” Ronnie said.

“I thought you said you were late for work? I'll tell ya on the way,” Sophie said, putting her hat back on her head as she kissed her mother goodbye. “Be home late, but don't worry. I'll be with this bodyguard. Bye, Mom.” And Sophie shoved Ronnie out the door without another word.

Violet sighed. It certainly seemed she barely had a daughter anymore...one she spent any time with anyway. By the time she got into the living room, Marty and Morris were fighting again....this time over a missing cake.

“You were supposed to bring it in. Did it even make it into the car or is it still at the bakery?” Marty said, her arms angrily akimbo.

“Woman, did you not see me fall flat on my face on the blasted front steps? If I had been holding it, it'd be a pancake!” Morris said, shaking his fist reminiscent of Ralph Cramdon's constant threat.

“And recall if you will, Miss All-High-and-Mighty,” Morris continued. “You went into the bakery yourself and I stayed in the car trying to scratch an inch through that metal cage. So if the cake is still at the bakery guess whose fault that is, huh?”

Marty frowned, knowing her old coot could be right, but never willing to admit it. “Be that as it may, I now remember it is in the backseat of the car. Georgiana, would you be so kind and get it for me and we can serve dessert? I'll make coffee and hot cocoa to go with it....knew I went into the kitchen for something...just flew out of my head.” She then went back to the kitchen.

“Hmm, couldn't be she was looking for what's left of her brain in there,” Morris mumbled, lest Marty hear him.

“Can I get you another drink, Morris?” Victor said, exchanging amused looks with Violet who could just barely keep from laughing out loud.

“I'll get it,” Violet said moving over to the wet bar.

“There's my darling lass. You always know what I need,” Morris said, eagerly accepting the whiskey, gulping most of it down and handing her the empty glass, lest Marty see that he had two drinks.

“So, what can I do to help with the decorations?” Violet asked.

“Queen Martina wants the mistletoe strung up, but if I stretch my arms for an hour while she fiddles with that stupid stuff getting the placement just right,” Morris said imitating Marty's commanding tone. “I won't be able to move them at all for a week.”

“Well, I can do that,” Violet volunteered.

“You and your stilts I suppose?” Victor asked, smirking.

“Oh, yeah...” she said, looking up at the high ceiling, somehow forgetting she was hardly bigger than Georgiana. “I'll stick with the Christmas tree, then.”

“And to reach the top you'll need this,” Victor said, producing a foot stool, the very same one he had bought several months ago especially for her, so she could more easily reach the top cabinets in the kitchen. “Peter and Julian like to take turns using it. See? They can nearly reach the middle of the tree.”

She took a box of ornaments, got up on the first step and smiled. “This will work,” she said.

“Wait,” he said, grabbing her hand. “How about...how are you feeling? Are you still having dizzy spells?”

“Oh, you mean the vertigo. No, I haven't had any episodes since I started taking my medication and I take ginger religiously which probably helps more,” Violet said, looking down at their joined hands. “I'm okay.”

“And the other thing?” he asked, stepping closer.

She blinked stupidly. Perhaps it was because he was so close that she could count each eyelash surrounding his piercing dark eyes, or it might have been his intoxication cologne which she always had loved, but it was most likely her mind went blank because all she could think about was the last time she kissed him and how long ago it seemed. No, she didn't know what he was talking about and couldn't even say she cared, not when at any moment he might lean in and...

Oh, if only he would.

They stared at each other, lost in memories of those days, weeks, months when they were nearly inseparable; when the only time they spent away from each other was when she went home to sleep in her cold bed...next to her ghost husband.

At last he said, “Your low blood pressure?”

“The...what....Oh! Well, oddly enough, the ginger helps with that too, but I also take medication for that, so.... I'm good...really, I feel pretty good now,” she said, trying to quell the disappointment which squeezed at her heart when he dropped her hand and stepped away.

“Why do they call 'em mistletoes? Doesn't look like missiles or toes,” Peter said, wrinkling his nose at the grey-green bunch of leaves with the odd white berries.”

“It's just a name they picked for it, Honey,” Violet said, stretching to reach the upper most branch and fix a pretty red glass globe to it. “Just like daffodils and daisies and oak trees.”

“I never sawed white berries before. Do they taste good?” Peter asked.

“Oh, no, Peter! They are very poisonous. Do NOT eat them,” Violet said.

“Okay,” Peter said, putting the leafy bunch back down on the table.

“Do we gotta put it on the Christmas tree?” Julian asked.

“No, it is strictly for doorways and strategic out-of-the-way places for...well, we all know what it's for,” Marty said, bringing in a large tray with cups, a tea pot full of hot cocoa, and a carafe of coffee. Georgiana followed with the cake on individual plates.

“What is it good for if you can't eat it?” Julian said.

“Does that mean da birds and aminals can't eat 'em, too?” Peter said.

“Not sure, Peter. Some berries which are poisonous for humans are fine for animals to eat. We can look it up,” Violet said.

“Georgiana knows the most important thing about mistletoe, don't you, Honey?” Victor said.

“Uh...I do?” Georgiana said, handing a large slice of cake to Morris.

She and Violet exchanged looks and giggled, but everyone else just stared at them.

“No idea,” the three of them said together, then they laughed, leaving the others staring in wonder, completely out of the joke.

Marty pursed her lips. “Really, if you're not going to make any sense, then just sit down and eat some cake!”

Which they all did quite happily.

Email ThisBlogThis!Share to TwitterShare to FacebookShare to Pinterest
Labels: how it should be