Chapter 301 Back to Normal 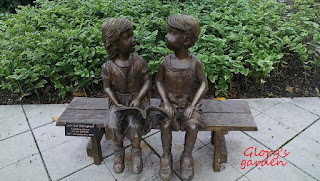 Violet didn't know whether to laugh, cry, call the paramedics or perhaps a blacksmith—if such a thing was even available in Catalpa Valley in this day and age. Realizing that none of those things would likely help in the immediate moment, she did the only thing which could. She shouted to Ronnie for help.

“What's up, Viol...holy shit!” Ronnie said staring in shock at his grandmother in full Mary Queen of Scots garb with a shiny pile of metal at her feet. “Wait... Is that Profess... I mean... is that Grampa???”

“Don't ask silly questions and help me get him up! He could be hurt,” Violet said, grabbing one of the metal-clad arms. “What in the world would possess you to wear a suit of armor when there's a foot of snow on the ground and dangerous icy spots everywhere? You're not a young man anymore, Morris, to be doing this sort of thing and it's not even Halloween!”

“I told him, the old fool, but would he listen? Not a wee bit!” Marty plaintively said, smoothing down the billowing skirt of her golden satin gown with one hand while steadying the bejeweled tiara sitting askew atop her head with the other.

“You should talk!” Ronnie said, hoisting Morris to his feet with relative ease. He lifted the visor to peer into his face and grinned. “You okay in there, Grampa?”

“Not particularly, Laddie. Mind getting me outta this iron sarcophagus?” grumbled Morris.

“Ah, so you'll be giving up on our beguiling wager, are ya now, ya meandering old fool?” Queen of Scots Marty said triumphantly.

“Not on your life, you bitter old hag!” Morris said. “But I can take the blasted helmet off for a bit, can't I? I need a drink... desperately!”

“Well, I suppose so...” Marty said, trying to hide a cunning smirk.

“Did ya hear me, Ronnie? I need a drink...a long, tall one and make it strong enough to knock me off my feet... again, there's a good lad,” Morris said, patting Ronnie on the arm.

“God help me,” Victor said, coming in to see what all the commotion was about. “What are you two doing dressed like that?”

“T'is a bit of a wager we have going, me darlin' Victor,” Marty said, her accent intact.
Victor gaped at her curiously. “Marty... Queen of Scots...now I get it. You weren't kidding,” he muttered to Violet who shook with suppressed laughter, although why she chose to do that was anyone's guess. The kids certainly had no scruple about laughing uproariously at the ridiculous antics of their adoptive grandparents.

“Gramma, you're so funny,” Julian said, getting a kiss on the forehead from Queen Marty.

“Grampa, you look like a robot,” Peter said, trying on the head gear and loving it.

“I certainly feel like one..a malfunctioning one anyway,” Morris muttered.

“Can I be a robot for next Halloween?” Peter asked, lifting and lowering the visor.

“Suppose so, Peter my boy,” Morris said. “Never catch me voluntarily getting in this thing again.”

“You guys are crazy, you know that?” Ronnie said, laughing while handing Morris a tall glass of his favorite whiskey.

“Ronnie, my boy,” Morris said after greedily gulping down half the contents and smacking his lips. “You're my new favorite. Anything you want is yours for Christmas.”

“Ronnie wants a neon gween Dodge Chawwenger...not a toy. One he can dwive,” Peter said helpfully.

Ronnie laughed. “Oh, sure, I'll find that in the garage come Christmas morning,” he said sarcastically. “Even Grampa isn't that crazy.”

“You sure about that?” Marty said.

“They're crazy all right... crazy and ….and wonderful,” said Georgiana, whose foul mood magically vanished as she hugged Marty and got an affectionate pat on the head from Mr. Roboto.

“They are complete lunatics, aren't they?” Victor whispered.

Victor sighed. “Just when you think everything is back to normal, Marty and Morris come around and...just unbelievable,” Victor said, shaking his head and without thinking he placed his arm around Violet's waist, pulling her close and smiled down into her happy, upturned face.

Time froze as they stared at each other. Victor had not realized how close they were—it felt so natural, after all-- but when he did he stiffened slightly. He went to remove his hand from her waist, but something stopped him...the sweet smile on her face perhaps or more likely the nagging little voice in his ear.

“Kiss her,” Richard urged. “Can't you see she wants you to?”

Did she? If Victor was a judge of such things, yes, Violet probably did, but so what? Nothing was going to come of it and he knew it. Still, Victor didn't move away, didn't even look away from those lovely hazel eyes, but he didn't kiss her either. He knew better than to do that, no matter what his inner voice told him.

“Dude, she wants you! She still loves you. Just kiss her and you'll see!” Richard said.

Victor knew all that, but that was not the problem, it never had been. Yes, she was attracted to him, she always had been as he was to her...no brainer there. That was likely never going to change.

“You idiot,” Richard said. “If you only knew how close she is to giving in and jumping your bones right this minute you wouldn't be standing there like a eunuch.”

Victor didn't believe that for a minute! Violet might be in love with him and she might even want to hop in the sack with him—not likely without a ring on her finger, but possible, but the thing was she was still not over Richard and likely never would be. That was the sticking point and that was not changing with one silly, little kiss.

“Kiss the girl, you blasted fool! Kiss her like you mean it. None of this silly little kiss crap. Kiss her until her toes curl, then you'll see how quickly things can change,”
Richard said. “Don't be an ass, Cowboy. Swallow your damned pride and kiss her!”

“Pride has nothing to do with it,” Victor unknowingly said aloud.

“All right then,” Queen Marty said loudly. “Can we move on with this? Do you give up, Morris? I say you lost the wager soon as you removed the bloody helmet.”

“You little harpy!” Morris shouted. “You said I could take it off your a while.”

“You assumed, you foolish old man!” she retorted. “That makes me the winner!”

“Really, Gramma, that's harsh,” Ronnie said, frowning at her. “Grampa coulda got hurt in that thing. He probably did and doesn't know it. All you had to do is speak with an accent and wear a stupid ball gown, which, I'll remind you, you do for fun on a regular basis. You can stop with the Scots talk now. I say it's a draw. Let's get you outta that thing before you hurt yourself more, Grampa.”

“I want you to stop making stupid bets with Gramma. She doesn't play fair, in case you couldn't tell,” Ronnie whispered, helping him off with the heavy armor. “How the hell did you get into this thing in the first place? We may need a can opener to get you out!”

The kids laughed hysterically and Julian offered to go to the kitchen to get one.

“Now you wee bairn can begin with the trimming of the tree in the living room and take Sir Gallahad with you,” said Queen Marty who refused to stop with the accent.

“No, not yet! I wanna talk to Violet first,” Georgiana said, turning away from Marty.

“Victor,” said Violet who wasn't even listening to the others. “I didn't catch what you just said.”

Much to Victor's relief Georgiana appeared by his side, saving him from answering.

“Only if it's okay with Violet,” he answered, giving Violet a questioning look.

“Of course,” Violet said, taking the little girl's hand. “We can clean up the kitchen while we chat. It's always good to have something to do while having a serious talk.”

“Yes,” said Violet smiling at Victor. “Just like that. We'll be okay, Victor. See you in a bit.”

Victor watched them disappear into the kitchen and sighed. “Yep, like we're back to normal ...almost.”

©2016 Glory Lennon All Rights Reserved
Posted by Glorygarden@msn.com at Thursday, May 05, 2016

Email ThisBlogThis!Share to TwitterShare to FacebookShare to Pinterest
Labels: Back to Normal