Chapter 295 You are such a liar 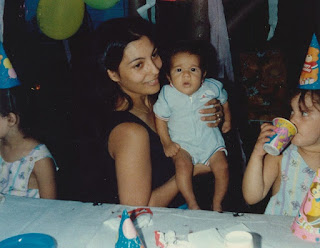 “You are such a liar!” Georgiana shouted.

Victor held up his hand, indicating he would handle this. “Who are you...really?” he said.

Reggie wiped his mouth on the cloth napkin and set it down. “Reggie Silber, just as I said. I have no reason to lie,” he said reaching for his wallet, extracting his license and handing it across the table to Victor. “I'm Georgiana and Julian's real... biological father.”

Victor alternately looked very carefully at the license and stared at Reggie. “Have any other form of identification?” he asked suspiciously.

Reggie took out several credit cards, a library card, a YMCA membership card and his business card showing him as manager of the Silber hardware store, but the clincher, the one item which put an end to all thought that this man was NOT who he claimed to be, was the well worn photo of himself with two very young children and a very pretty young woman who looked remarkably like an adult Georgiana.

“What about Peter?” Julian asked, although nobody heard this.

Victor stared at the photo for a long moment, then held it out for Georgiana to see.
She bit her bottom lip and reached out for it. “Mommy,” she whispered. “That's Mommy.”

Victor gave back all the items, but the photo remained with the children who put their heads together to look at it, whispering to each other.

Reggie waited for the photo to be returned until it dawned on him that these poor kids might not have any momentos of their mother. “I would let you have that, but it's the only picture I have of Janie and...of us as a family. I can try to get a copy made for you...if you like.”

Peter shook his head. “I tought her name was Mommy.”

“No, it's Janie...Janie McAllister,” Reggie said, looking as if he's just bitten into a lemon.

Victor reluctantly took the photo away from the kids and handed it across the table. “I think they would really appreciate a copy of this, Reggie. Thank you,” Victor said. “I'm sorry about all this suspicion, but... something's not right about this. Nothing makes sense. Why would the investigator say you were living in Detroit if you were never there?”

“Well, I don't know what he told you, but when he told me Janie was dead...well, I was shocked at first and devastated—she was my first love, after all-- but after I got over the shock, it only made sense...sadly. She wasn't exactly...well,” Reggie said, obviously tempering his language in front of the kids. “Her mood swings were legendary. What was his name, the investigator?”

“Yes, Tom Ayres. He told me so much I didn't know,” Reggie said, his eyes flicking from one child to the other. “I...I had no idea that...I didn't know that Janie was gone, that the kids were stuck in some orphanage all that time. I felt sick to my stomach to hear it all. Last I saw Janie was six years ago...maybe five...and...”

“You lie,” Georgiana said so quietly they could barely hear it.

“How many times do I have to say it? My name is NOT Gigi!” she said.

Reggie sighed. “I'm sorry. It's how I remember you....as my little Gigi, a perfect little four year old girl, wearing pretty dresses with an engaging smile, and so smart...you took my breath away when I saw you just now. You look so much like Janie. I loved her and I love you and Julian.”

“Lies, lies, LIES!” she said. “You hated me, you hated us. You yelled at us whenever we made noise. Little kids make noise, they can't help it. And when Peter cried you hit me cuz I couldn't make him stop and...”

“Liar!” she hissed. “You always hit us and you hit me so hard one time that I fell back and hit...hit a table or something. I still remember the big blood stain on the rug, my blood, cuz you just left me there to bleed to death. Mommy came home and... and Mommy had to take me to the hospital to get stitches. She yelled at you and you yelled at her and you hit her too. I have a scar right here, still can feel it.” She rubbed a spot on her head just behind her right ear, tears streaming down her cheeks. “You hurt us alla time.”

“That wasn't me, Gi...Georgiana,” Reggie said. “Janie left me before Peter was born, before I even knew she was pregnant,” He looked at Victor. “I swear it was not me. I'm guessing it was Jesse, Janie's husband.”

Victor stared in stunned disbelief. “What do you mean her husband? Weren't you married to her?”

Reggie shook his head. “I wanted to, but she refused. It wasn't til he showed up one day, Jesse I mean, after we were living together for over four years that I discovered why she wouldn't marry me. She was already married and she obviously never stopped loving him. We had Georgiana and Julian by then, but it wasn't enough for her to stay. We had a huge fight as you can imagine, but I never hit anyone!” He took a deep breath and shook his head. “Everything happened all at once.”

“What do you mean?” Victor said.

Reggie sighed. “It's a really long story,” he said.

“I need to understand this, Reggie.”

He sat for a long while playing with the droplets running down the glass. He sighed heavily and started the story.

“I had been going to school when I met Janie,” Reggie said.

Reggie smiled and shook his head. “College. She was working in the cafeteria. I fell in love instantly and I asked her to marry me maybe a month after that. She wouldn't, but we moved in together. My parents were furious with me... she was a lot older than me and they felt that she was just using me...perhaps I should have listened.”

“Some more than others are, yes,” Reggie said, looking guilty. “Anyway, with school by day and working in my dad's hardware store by night and on weekends, and having a new family to take care of soon after that, I was really busy. Then my father had a stroke, a pretty bad one for someone so young and I had to take over the shop and also help my mom with him, so I didn't have much time for the kids and Janie.” He stopped at this point and looked at Peter. “I see now how she spent her time while I was away... with Jesse.”

Victor's eyes widened and he also looked at Peter.

“Jesse...Reggie?...Jesse...Reggie...?” Georgiana kept saying under her breath. “I only remember Mommy yelling at Jesse...not Reggie...I think. Did you play the piano?”

“Me?” Reggie said, incredulous. “All I could ever play was Mary Had a little lamb and not very well, using just one finger. Why do you...oh...yes, Jesse was a musician...or so he fancied himself. If you ask me he was just a sleazy dirt....” He stopped abruptly and glanced at Peter who was listening intently but apparently didn't understand much of the discussion.

“Jesse was the one playing the piano...not you?” Georgiana said.

“Must have been,” Reggie said.

"It makes sense, Georgiana," Victor interjected. "Reggie never saw Peter, remember? So he was not around when Peter was crying."

"Jesse's the one who yelled at us and hit us,” she said, at long last staring straight at Reggie as she spoke.

“I didn't, Julian, not really,” Reggie said. “Janie left me...and took you with her. It was after a full week staying with my parents, taking Dad to therapy and keeping Mom from running herself ragged and I was still running the store full time and ...anyway, I came home and all I found was a big blue note ...oddly enough folded into a paper airplane.  It would have been funny if it wasn't so... sad.”

“What did it say?” Georgiana said.

Reggie remained silent for a minute. “I … I don't remember exactly, but I was furious. I couldn't believe she would do that to me...just leave and take my kids with her and she left no clue where they went. No, that's not true. She mentioned going to the Carolinas—don't remember which one now--but I do remember she said she was going with Jesse. That's the only thing that stuck in my mind...she was chasing after that degenerate. She left me for him.”

“Who is Car-lina?” Peter said.

“North and South Carolina are places, Peter, not a person and a degenerate is a bad person,” Georgiana said staring at Reggie. “We didn't go there...I don't think so... cuz Mommy said we were going to live in Grammy's house. So...why...why didn't you look for us there? Didn't you care what happened to us?”

Reggie stared at her until he couldn't take it anymore. That reproach was simply too much. He covered his face with his hands and broke down, attracting the attention of some of the diners around them.

“Daddy, why is Reggie crying?” Julian asked in a loud whisper.

“Kids, are you done eating?” Victor said, anxiously, as diners around them stared in curious disbelief.

“No,” Peter said, stunned to see a grownup crying, but not too shocked to prevent him from munching on his pickles.

It was times like this when Victor truly wished he could get over his disdain for Chuck E Cheese and Cici's Pizza, places so loud and crowded with tons of kids running around making themselves heard over the pinball machines by shouting themselves hoarse, that you could practically kill someone and no one would notice a grown man weeping.

Email ThisBlogThis!Share to TwitterShare to FacebookShare to Pinterest
Labels: You are such a liar