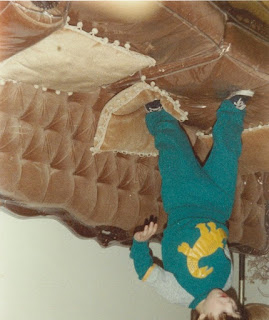 Victor glanced anxiously at Georgiana who sat shotgun in the car beside him clutching a new, soft and furry, bright pink Teddy bear. She stared at the bear, her expression grim, shocked and confused. Her brothers on the other hand, buckled in their car seats in the back, were the exact opposite. They could not have been more delighted, carefree and happy. They had finally met their father, after being so curious about him, and they liked him prodigiously...or perhaps they just liked the toys he had brought for them. The jury was still out on that score.

“Are you all right, Honey?” Victor quietly asked, already knowing the answer to that was a resounding NO! How could it be otherwise when the world as Georgiana had known it had just been turned upside-down and inside-out?

Victor never saw it coming. Nobody could have! Although...there had been a few clues along the way, too subtle to pick up at the moment, but in hindsight....well you know what they say about that. He really ought to have read the investigation report more carefully. But even still...

All went well at the mall. They got in line behind a few other families for their photo session. They had a nice time taking loads of them, some with Santa and his elves, some by the huge Christmas tree and others by the reindeer display. They got the best of the photos framed and gift wrapped and they arrived at the restaurant with plenty of time to meet Reginald Silber, the kids' biological father.

A visibly nervous Georgiana stood close to Victor, never leaving his side for a minute, and holding his hand so tightly he was starting to lose feeling in a few fingers. The boisterous boys were a bit more difficult to keep in proper form. Their exuberance more than made up for Georgiana's stoic silence.

They didn't have to wait for a table because they beat the lunch crowd and Victor made sure they got the best table, one with a clear view of the door so he could spot the man when he entered. He got a brief description and a grainy photo from the investigator he sent searching for the guy, so Victor would recognize him...or so he thought.

“Boys, I want you to behave, hear me?” Victor said sternly.

“When is he gonna get here?” Julian said.

"I'm sure he'll be here soon. We are a little early so he's not late yet," Victor said looking over the menu.

“Is that him?” Peter said pointing to the nicely dressed man who just came in and was now speaking to the hostess.

Victor looked up from the menu, took one look and shook his head. “No, it isn't. What do you think you want for lunch?”

“We can do that,” Victor said. “How about you, Georgiana? What do you think you want? A burger maybe?”

“Make up your mind, Peter. You can't have every...thing...” Julian said, frowning slightly as the same man pointed out by Peter came up to their table. “Uh...Daddy, didn't you say...?”

“What are you having, Jules?” Victor said, before catching sight of the man who stood staring at Georgiana, transfixed. He immediately stood.

“I...uh...I'm Reggie Silber,” he said, his hazel eyes—so much like Julian's-- flicking from Georgiana to Julian-- and then to Peter. He did a double take and went a bit pale.

“Yes, we spoke on the phone. Pleased to meet you,” Victor said extending his hand. This was not what he expected, not at all. He certainly didn't look like a greasy haired, drugged out bum and nothing like the ripped jean clad guy in the photo. Dressed casually, yet neatly in khakis, a cambric shirt, sedate tie and a classic navy blue peacoat with his neatly trimmed hair, which was much darker than in the photo but exactly the shade to match of Julian and Georgiana's hair, Reginald Silber cleaned up good.

They shook hands and Victor offered him a seat, but Reggie remained standing for a moment staring at Georgiana, a reminiscent smile on his face. “Hello, Gigi.”

“It's what I used to call your sister when she was little,” Reggie said turning his gaze on Peter. That's when the smile slipped off his face. “We've never met.”

“Julian, Peter,this is your father, Reginald Silber,” Victor said. Noticing how Georgiana had gone quite pale and hid behind the menu he didn't bother mentioning her as this was hard enough on her. “Say hello, boys.”

Peter stood up and rather formally shook hands. “Pleased ta meetcha,” he said, as properly as he had been taught. Morris Kramer—his teacher-- would have been proud. “I'm Peter.”

Julian followed suit. “I'm Julian. What are we s'pose ta call ya? You're our father but Georgie says you're not our dad, cuz Daddy's our dad now and we can't have two dads...that's just weird.”

Reggie swallowed hard and seemed to be at a loss for words for a moment. “Um...Reggie is okay with me...if you like,” he said with a forced smile. “You sure have grown up, Julian. You were just a baby when I last saw you.”

"Imagine that, a baby growing up," Georgiana mumbled.

“I don't 'member you too good,” Julian said, sitting back down.

“No, I can't imagine you do,” Reggie said sadly, sitting down. He had a shopping bag in hand and from it he pulled out a bright pink Teddy bear.. “I, uh...I have something for you, for all of you. I got this for you, Gigi.”

“My name is Georgiana,” she said in a snippy sort of voice, continuing to hold the menu in front of her face, so he was out of her line of vision.

“Sorry about that, Gi...Georgiana” Reggie said and he put the bear back in the bag.

“You promised I didn't hafta talk to him if I didn't want to,” she said, on the verge of tears.

“What is it?” Peter said excitedly.

Reggie produced two large boxes each containing a rather splendid collection of toy antique cars. He handed one box to each boy.

“So cool! Wait til we show these to Ronnie!” Julian said, pulling out a baby blue '68 Mustang and a white '57 Thunderbird.

“Boys, what do you say?” Victor said.

“Thank you, Reggie!” they both said with so much enthusiasm the few diners in the restaurant looked at them curiously.

Reggie laughed nervously. “You're welcome,” he said, setting the shopping bag under the table. He glanced over to Georgiana but she was still hiding behind the menu.

An awkward silence followed but the server came over at that point--thankfully-- and took their orders; Peter comically changing his choice three times before they were done which eased the tension a good deal.

“Oh, I forgot!” Julian said, scrambling out of his seat and going under the table.

“Julian, what are you doing?” Victor asked.

“Getting the present for Reggie,” he answered, excitedly thrusting the gift into his father's hands. “This is for you, Reggie. We got it today. Open it and see if ya like it.”

Reggie stared at the silvery blue wrapped present, then at the boy who gave it to him. He placed it on the table in front of him and hugged Julian. “Thank you, Julian...thank you so much.” He kissed the boy's cheek and held on much longer than Julian thought was necessary.

“But you don't know if you'll like it yet,” Julian said giggling.

“Right,” Reggie said, releasing him at last. He glanced at Georgiana-- now without the benefit of the menu to hide behind-- before he unwrapping the gift. Once opened he stared at each photo in turn, blinking quickly. “This is amazing. It's perfect. I love it. Thank you...really, thank you so much. I don't deserve this.”

“Georgiana, there is no reason to be so rude,” Victor said, getting annoyed.

“Is it rude to tell the truth?” she said.

He thought on that a moment, then sighed. “For the most part, yes, most truthful comments are considered rude.”

She glared at him and crossed her arms over her chest. “So, I can't say that I hate him either?”

Victor glanced at Reggie and could see the pain in the man's eyes as clear as day. “She didn't mean it, Reggie,” he said.

“My name is Georgiana!”

Thankfully, the server came at that moment with their drinks.

"Julian, you mentioned someone named Ronnie...who is he?" Reggie asked, after taking a sip of his unsweetened iced tea. "A friend of yours?"

"I really like kids," Victor said, smiling at Georgiana. "And this bunch is very special to me."

Reggie nodded whiling looking at Georgiana, but she refused to look at him. Try as he might, she just would not even acknowledge his presence except to give a snide remark. Simon would have been impressed!

Julian and Peter filled what might have been awkward silence by asking Reggie all sorts of questions none of which Victor thought appropriate.

“I don't mind answering their questions, Victor,” Reggie said, just as the food came which diverted the conversation elsewhere.

“Where's my pickle?” Peter said, looking under the fries for it.

“We don't have whole pickles. Would  pickle chips be okay?” the waitress asked.

“That would be great. Thank you, Linda,” Victor said.

“No, we're on Christmas break,” he answered.

“I think Reggie meant to ask what grade you are in, Jules,” Victor said.

“Oh! I'm in second grade and Peter's in kindergarten and Georgie's in forth,” Julian said. "She's like really smart!"

“Where do you live?” Peter asked.

“Not too far from where we used to live, in Binghamton,” Reggie said.

“We don't 'member where we lived,” Julian said, munching on a fry.

“No, I guess not. You were too little. We lived in Cortland,” Reggie said.

“Is it very far from Talpa Valley?” Peter asked.

“Not too far, few hours drive. There wasn't too much traffic at this time of day,” Reggie said. “It's a very pretty place. Pity I didn't know you were so close all this time.”

Victor frowned as he listened. None of this was right...not according to the investigator's report. What was this man playing at?

“You're lying,” Georgiana said. “Daddy said you were living in Detroit. I'm not stupid. I know that's too far to drive to New York in one day.”

“Detroit?” Reggie said, nearly choking on his food. “I've never been there in my whole life. What gave you the impression I lived in Detroit?”

Georgiana and Victor exchanged looks. Who was this guy? Cuz he certainly was NOT Reginald Silber!

Email ThisBlogThis!Share to TwitterShare to FacebookShare to Pinterest
Labels: upside-down and inside-out