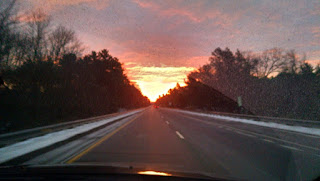 “Know what this reminds me of?” Ronnie said, and without waiting for a reply he burst into song.

“I certainly wish they would get lost,” Simon said from the back seat.

Cassandra nudged him with her elbow. “Oh, stop. They sing great together. We don't even need the radio with them around!”

“Yeah, but we could use a mute button,” Simon replied. “So where is this secret place you're taking us, Ron?”

“See? Once they start singing there's no stopping them. It's so annoying!” Simon said.

“Shouldn't we get rid of all our shopping first before going anywhere?” Cassandra said, shunting the shopping bags at her feet. “It's kinda crowded in here.”

“No, we can't,” Ronnie said, at last finishing the song. “I want Sophie to try out her Christmas present.”

"I didn't, not yet anyway," Ronnie said.

“Hey! You can't do that,” Cassandra said. “No opening gifts until Christmas day. That's the rule.”

“Normally I would agree with you, Cassie, but with this type of present...well, she just should try it out first...you know, to see if it suits her.”

“Like a coat?” Sophie said, holding her arms out in front of her to show several inches of bare wrist. She could certainly use a coat of her own since the one she was currently wearing was her mother's and didn't exactly fit her lanky frame very well.

“Not exactly,” Ronnie said turning off the highway and going up a dirt road which appeared to be going deep into the woods.

“Uh, Ronnie,” Cassandra said nervously. “You planning on killing us and dumping our bodies here?”

He laughed. “Yeah, that's me, Breaking Bad all over the place!”

Ronnie drove deeper into the woods for several minutes until seemingly at the end of the road where you could just make out a mottled colored, metal building. It blended in so well with its environment of evergreen trees and bushes that you had to know it was there in order to see it.

“An abandoned camouflage building out in the woods is your idea of a special place to take the girls?” Simon said.

“What is this place, Ronnie?” Cassandra said.

Ronnie turned in his seat to grin at her. “Now don't freak out. It's a shooting range. Come on, this'll be fun!” he said stepping out of the pickup, stomping through the snow and into the building, not bothering to wait for the others.

With her mouth hanging open, Sophie turned in her seat to stare at the other two whose expressions were similar to her own. “Is he serious?”

“Apparently,” Simon said opening the car door and stepping out. “Guess we gotta do it or...”

“Or we can steal Ronnie's truck and leave him here,” Cassandra said, and she wasn't at all kidding.

Simon laughed. “Well, we're here, so we may as well go in, at least to watch Ron and me shoot.”

“You know how?” Sophie asked, jumping out of the truck.

“I've done some shooting. Andy insisted. He used to take us hunting when we were kids.”

He laughed. “I never did, but Andy...well, he did like a good venison stew every once in a while.”

“I've never even touched a real gun and you and Ronnie expect me to actually shoot one?” Cassandra said.

“You've lived in Catalpa Valley almost your whole life and your Commando brother has enough weapons and ammo in his arsenal to hold back the zombie apocalypse on his own and you've never shot a gun?” Sophie said.

“What? You have?” Cassandra said.

“Of course, I'm a country girl, after all,” Sophie said, running after Ronnie. “”Bout time somebody asked me to go shootin'.”

“But you're a very cute oddball,” Simon said, taking her hand.”Don't worry, you don't have to shoot anything if you don't want.”

“Last thing I wanna do!”

*****
“Oh my God, that was so much fun!” Cassandra said nearly three hours later. “I don't know why Frankie never thought of this. We coulda come here together and...I gotta get my own gun and then me and Frankie can come all the time. I'd love it!”

Ronnie gave Simon a smug look. “And you said they wouldn't like it.”

“You can laugh, Sophie, but you especially need one,” Ronnie said seriously.

“It's not just for hunting,” Ronnie said. “You need protection.”

“From all those zombies, yeah...” Sophie said, rolling her eyes.

“No,” Ronnie said, grabbing her arm, forcing her to look at him. “You need protection from all those 'Antoines' you keep running into.”

“Antoine? Oh, don't be ridiculous,” she said, pulling her arm away but he held fast.

“I remember what you told me, what almost happened to you in Tampa,” Ronnie said.

“Daytona,” Sophie said, before she could stop herself.

“What happened in Tampa...or Daytona?” Cassandra said, looking from one to the other. “Sophie?”

“Nothing. Nothing happened,” Sophie said, glaring at Ronnie.

“Come on, Cassandra,” Simon said, helping her into the backseat. “We don't need to hear their fight.”

Ronnie waited for his brother and Cassandra to be out of earshot, before starting. “You're gonna live in the city, Sophie, where there are a hell of a lot more people than anywhere in Florida and loads of them are not very nice especially to sexy college girls like you. Now do you get it?”

“You literally want me packing heat?” she said, incredulous.

“Yes, dammit. I want you to be safe. I want you to leave a trail of dead would-be muggers, rapists and thugs in Manhattan, Brooklyn, Queens and even the Bronx if you're stupid enough to go there. You said you were scared. Well, a weapon is the greatest eliminator of fear. I don't want you to live in fear, Sophie. It's no way to live, okay?”

She stared at him, a warm feeling blossoming in her chest. “That means...you care about me, don't you?”

Sophie smiled and kissed his cheek. “Thank you, Ronnie. I care about you, too.”

Ronnie could have kicked himself. He pulled his collar closer to his reddening neck and jumped into the truck.