Chapter 256 Just shut up about it 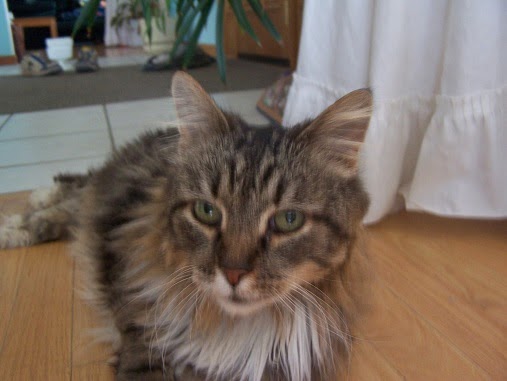 Cassandra held the door open and looked her bewilderment. “Um... so you're not gonna tell them I told you?”

“You didn't, did you? I already knew,” Catherine said, stepping out of the restroom where she came face to face with Simon. She stare at him. “What are you doing here, Simon, lurking around the restrooms like a common pervert?”

“As opposed to an uncommon pervert?" he quipped.

Catherine gave him a withering look and his smirk vanished.

"Sorry, Mom. You've been so long I started to worry,” he said, looking from his mother to Cassandra. “Was there a problem?”

“No, Cassandra was kind enough to help me with Andrea,” Catherine said. “Seems to know her way around babies and it's good to know she's not planning on having one any time soon.”

He smiled. “That is good to know. Perhaps she should use that and go into pediatrics,” he said.

“I'm not in med school, Simon, and you know perfectly well it'll never happen,” Cassandra said, irritably. “So I'd appreciate it if you'd stop teasing me  about it.”

“I'm not teasing. I'm of the opinion that anyone who wishes to heal the masses ought to be able to do so,” he said. “Don't you agree, Mom?”

“In my experience, the masses are always in need of healing and doctors are becoming rare, fewer and far between in some places including Catalpa Valley, so...yes,” Catherine replied.

“That's fine for you to say, but I have no choice in the matter, so just shut up about it, Simon!” Cassandra said, rushing ahead of them to get to their table first.

“Did you say something to upset her?” Simon asked.

“She was perfectly fine when we were alone, Simon. I think you were the one to upset her just now,” Catherine stated. “Which begs the question why are you pushing her to go to med school when she's dead set against it?”

“Why the hell is everything a long story nowadays?” she grumbled, pushing the stroller forward.

Ronnie stood up as his mother approached the table. “You okay, Mom?” he asked anxiously.

She stared at him silently, her eyes taking in his nervous expression. Then without so much as a change in her own expression or a single word she wrapped her arms around him and held him tightly. He stood stiff for a split second then he relaxed and hugged her back.

“I love you, Ronnie, you know?” she whispered.

“Uh...I love you too,” he said, giving her an extra squeeze, before releasing her, but she wasn't through with him. She kept staring at him, her fingers reaching up to touch his thick, over-long hair which had a tendency to curl at the ends.

“Do you want me to get a haircut?” he asked.

“Whatever for?” she said.

He shrugged. “To look respectable?”

She smiled. “No need for that just now,” she said, sitting down. Catching a challenging glance from Sophie she added, “I've barely touched my food, but you seem to be completely done with yours, Sophie. Would you like to order something else? We wouldn't want Violet to think we're starving her child.”

Taken aback from this surprisingly friendly tone, Sophie looked around the table then shook her head. “No, thanks, Mrs. Delaney. I was just gonna wait for whatever Cassie doesn't finish. I'm always eating her leftovers. It's our thing,” she said.

Right on cue Cassandra took a bite out of half her sandwich and pushed the other half toward Sophie. “Here ya go. Mmm...the soup's the right temperature now. It was way too hot before,” she said, sticking her tongue out and pointing to it. “It berm my tum.”

Catherine smiled and picked up her fork. “Well, just as long as everyone's happy...”

This was the thought running through Simon's head as he watched Catherine—or the pod-person who was pretending to be his mother-- hugging Ronnie as if she hadn't seen him in years. Where was the disappointment? Where were the snide comments and the barrage of questions about his future plans? She was now being perfectly nice and polite to Sophie, too. He thought his mother would have chewed up and spit her out by now, which she deserved. Where was the malice? What happened to the snark?

It must have been Cassandra. What had happened in the restroom? What had Cassandra said to his mother to cause such a change?

Well, he was going to find out one way or the other.

He leaned over and whispered in Cassandra's ear, “What did you say to my mother?”

“Nothing,” she replied, eating her soup.

“You must have talked,” he said.

“About what?” he said impatiently.

“Mostly the baby,” she said, slurping her soup on purpose assuming it would irritate him.

“Know any other baby?” she snapped.

He watched her for a minute, then sighed, knowing he would get nothing more from her. His gaze drifted to his mother. There she was her gaze going from Ronnie—still nervous and uneasy knowing Catherine could strike at any moment—to Sophie, who contrasting drastically, seemed quite unconcerned and carefree.

What was going on?

Other than Simon's internal struggle to discover his mother's plans, the rest of lunch went along well, surprisingly without the expected cat fight—much to the disappointment of fellow diners who were wishing for something scandalous to post to their facebook pages or a juicy video clip for their youtube accounts. No such luck however.

Catherine was not going to have Sophie believe she was completely off the hook, however.

“I hear you're in a rock band, Sophie, in Miami?” she asked politely.

Sophie's blue eyes widened in surprise. “Does everybody in Catalpa Valley know about that?”

“You're the one always complaining about small towns and everybody knowing your business, so why are you shocked?” Simon asked.

“You were an interesting topic of conversation during our Thanksgiving celebration,” Catherine said.

“Geez, your dad told me something about this, but...I thought he was kidding,” Sophie mumbled so only Ronnie could hear.

“Everybody saw the Youtube video... some of us several times,” Simon said, staring at Ronnie who avoided his eyes.

“Yes, I was pleasantly surprised to see you knew LP Van Gholston and his son,” Catherine said.

“He kinda wants to stay anonymous, so...aside from my mom calling him Scott--cuz his middle name is Prescott-- he prefers Bug and he doesn't use his last name at all,” Sophie answered. "He wants to make it on his own, not using his dad's notoriety for his gain."

"Rather stupid of him," Simon muttered.

“I see,” Catherine said, looking slightly bewildered. She shook her head then added, “Playing at Downton Abbey must have been thrilling.”

Catherine blinked at him. “What did I say?”

“Downton Abbey, which is a great show, but has nothing to do with rock music,” Cassandra said, giggling.

Catherine rolled her eyes. “Ugh...Downton Abbey! The women at work speak about nothing else, but I couldn't imagine anything more boring. They've been trying to get me to watch the stupid show for years and I've refused to be pulled in. What? Watch the English aristocracy cling in vain to their dilapidated castles and crumbling social status? I'd sooner watch the Jersey shore idiots!” Catherine said making Cassandra dissolve in giggles.

“But won't your friends have a laugh now that they have you talking about it?” Cassandra said.

“Hmm...I'd like to keep that a secret, if you don't mind,” Catherine said, giving her a sly wink.

“Don't see how you can get along with my mom then,” Sophie said.

“Why do you say that?” Catherine asked.

“My mom loves that show, diehard fan. She even bought the DVDs and she watches it from start to finish--all five seasons-- while she's baking cookies, cooking dinner or knitting something,” Sophie said.

Catherine made a face. “An incurable romantic, I take it?”

“That's my mom,” Sophie said, waiting for an insult which never came.

Catherine smiled at her boys and said, “That is precisely why Violet is perfect for your father.”

Sophie would have preferred an insult. It would have allowed her to vent her spleen, if nothing else. She couldn't understand why everyone and their mother expected her mother to completely forget about her wonderful dad. She moodily picked at the remaining fries on Ronnie's platter unaware that her thoughts were clearly written on her face.

“You don't like the idea of your father being replaced in your mother's heart, do you, Sophie?” Catherine said.

Catherine smiled, though not unkindly. “I know the feeling well.”

Sophie stared at her, incredulous.

“I never thought my mother would remarry. I assumed she would never get over the loss of my father, but...” Catherine said. “She hadn't dated for over twenty years after all, but then she...to have her up and marry Morris out of the blue...”

“It wasn't out of the blue, Mom,” Ronnie said. “Gramma was in love with Morris before...”

Ronnie stopped abruptly when he saw Simon shaking his head, but it was too late. The proverbial cat was out of the bag.

Email ThisBlogThis!Share to TwitterShare to FacebookShare to Pinterest
Labels: Just shut up about it