Ronnie looked from his mother—her expression one which often scared him witless-- to the defiant look on Sophie's face, and he couldn't understand why Sophie didn't evaporate on the spot. He had the sudden urge to toss her over his shoulder fireman style and take her as far and as fast as possible away from his vengeful mother before... oh, hell, he didn't know what would happen, but he certainly didn't want to hang around to see it! 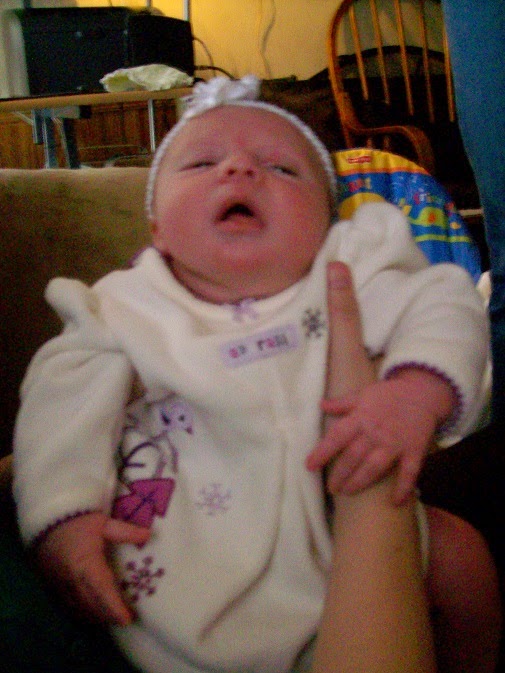 Catherine, although seething on the inside, smiled at Sophie in a perfectly diabolical sort of way. She recognized the look on this skinny little blonde—Bring it, Bitch! It clearly said-- and she welcomed it. It had been a long time since she had to put an obnoxiously impertinent person in their place, but she certainly wasn't out of practice. Oh, but that pretty little  girl would not know what hit her, nor would she see it coming. Sophie would be in tears before long.
Let's hope her mascara is waterproof.


Unfortunately for Catherine—and possibly fortunate for Sophie—at that very moment the baby started fussing and although Catherine swiftly picked up Andrea and tried her best to soothe the child by sweet words and a cuddle, the small whimpers turned into a full out howl and there would be no more peace, nor any further discussion, about Ronnie or anything else, until the baby was satisfied.
“Oh, dear, is she hungry?” Cassandra asked.
“She needs to be changed,” Catherine said, grabbing the diaper bag and standing up, her eyes on Sophie. “Do not for a minute think this conversation is over.”
“We’ll be here waiting,” Sophie said, carelessly.
“What the hell do you think you’re doing?” Simon hissed at her once his mother was out of earshot.
“It’s a blonde thing. You wouldn’t understand…even if you are blond yourself. You’re not in the double X-Club,” Sophie said, taking the last bite of her burger.
“What’s the double X-Club?” Ronnie asked, bewildered.
“She means you don’t have double X-chromosomes,” Cassandra said. “Sophie, you were a bit rude, you know.”
“Like I care,” Sophie retorted.
“Right, why would anyone think you would?” Simon muttered, going back to his lunch.
“Sophie, don’t mess with my mother, okay? She’ll eat you alive,” Ronnie said, anxiously.
Sophie grinned and took a bite out of a pickle spear. “You might oughta worry about your mom, not me,” she replied.

“Sophie, listen to me. You don't want to make an enemy out of my mom,” Ronnie said, desperately.

“Then she shouldn't have started in on you while I was around. You might not stand up for yourself cuz... I dunno, you're too respectful or something, but...”

“Where are you going?” Simon said, startled.

“The ladies room. Please excuse me,” she said, dropping her cloth napkin onto her chair and leaving the table before Simon could even get up.

“She's my mom,” Ronnie continued, ignoring the others. “That's just how she is. I would never talk to your mom like you did just now with mine.”

“That's cuz my mom wouldn't be so mean to you,” she replied.

“Whoever it was that had the brilliant idea to get my mom together with your dad,” Sophie snapped.

“Excuse me? What's one got to do with the other?” Simon asked.

“You and Ronnie went out of your way to rescue me from Antoine last night just cuz my mom asked you to, right?” Sophie said.

“Yes, what of it?” Simon said. “Would you have preferred it if we hadn't?”

“No, there's gotta be a reason,” she said. “Why are you protective of me?”

Ronnie exchanged confused looks with his brother and shrugged. “Cuz... cuz...well, you don't wanna hear it but...cuz one day we're gonna be related,” he said.

“Exactly my reason for standing up to your mother,” she said.

Ronnie gaped at her. “Wait... are you finally... like...you're now okay with your mom and our dad getting together?”

She made a face--like her milk shake suddenly turned sour. “I wouldn't say I'm okay with it...more like... resigned, I guess. That video...” She shook her head as if trying to dislodge the disturbing image from her mind. “I see now what you mean... and what you said before back at my house makes sense, but...I just didn't give her a chance to tell me what was going on and... It was my fault so...I gotta have a real talk with my mom...”

Ronnie smiled. “That's exactly what you should do. Violet's great and if you're honest with her she will be with you, too. Hey, you'll see it'll be great to have our families mesh. My dad really loves your mom and he'd do anything to make her happy,” he said, happier than he'd been in a long time. “Besides, you could do worse than getting brothers like me and Simon! We proved that last night right? You just told my mom that.”

“You I don't mind, but Simon...” she said, glaring across the table at his smug face. “I have my doubts.”

Ronnie chuckled. “He ain't so bad after you get to know him better. He'll grow on ya.”

She stared at him, then sighed. “Fine, I'll try to be...more like my mother, I guess,” she said making a face. “She lets people insult her and she never...”

“Who the hell would dare insult your mother? I doubt she's ever done anyone harm in all her life!” Simon said.

“Like that matters,” Sophie said. “You've been living in Catalpa Valley how long and you still don't know how small towns work? All the backstabbing and gossip and everybody knowing your business. Can't wait to be living in the city and away from all that!”

“You're dreaming if you think it's any different in the city,” Simon muttered.

“Where ya gonna live?” Ronnie asked. “On campus housing?”

“That's what my mother wants me to do, but I want to live with the guys,” Sophie whined. “The brownstone has a great view of Central park. It's right near the Dakota...I think Wayne Gretsky and Sting live there...but anyway, it's not so far from the school that I couldn't handle it. I could take the subway or a bus.”

The brothers exchanged bewildered looks. “What guys?” they said simultaneously.

“My bandmates, Danny, Rick, Elian, John and Bug,” she said, her eyes on Cassandra's sandwich. “Think she'll eat that?”

Simon frowned. “You leave her food for her and eat your own!”

“Already done with mine, dear brother, or haven't you noticed?” she snapped, showing the platter with its sole untouched occupant—a sprig of parsley.

“We'll order you something else then if you're still hungry,” Simon remarked and in an exasperated undertone he added, “Where does she put it?”

“So...uh...these bandmates are...uh...all guys?” Ronnie asked, as casually as he could muster.

“Duh,” Sophie said, stealing one of his fries.

“And you can't guess why Violet wouldn't be too thrilled with that idea? You living with five men.” Simon asked.

“They're harmless,” she said, taking another fry and popping it into her mouth.

“Are you saying none of them have...ever been interested in you...asked you out?” Simon said, skeptically. “Doesn't seem likely as they're all musicians and there's not a musician alive who doesn't try it with every girl in sight.”

Sophie frowned at him. “Not exactly,” she reluctantly answered.

Ronnie nudged her foot as a warning to say nothing more. “Wow, it's been a while since Mom left with the baby,” he interjected quickly. “Think she needs help or something?”

“How would I know? I'm not the manny around here, am I?” Simon replied. “So, what's this new project, Sophie?”

“Oh, nothing you would understand,” she said, dismissively. “You don't have the right touch.”

“Excuse me? The right touch for what?”

“She means you're not musical,” Ronnie said, giving her a warning look. “Right, Sophie?”

She laughed and stole another fry. “Maybe I'll get dessert.”

“Yeah, you do that,” Simon said, completely oblivious to the undercurrent going on between the others at the table as he frowned looking toward the restrooms. “What can be keeping Cassandra?”

“Maybe your mom's letting her have it for daring to speak her mind,” Sophie suggested. “Poor Cassie, she's not got that blonde thing going for her. Sweet as candy she is...not a mean bone in her diminutive body...a push-over just like my mom.”

The horrified expression on Simon's face made her grin.

“If you'll excuse me,” he muttered and he swiftly left the table.

“My God...” Sophie said, laughing herself silly. “You'd think she was the wicked witch of the east or something!”

“If she were only that nice...” Ronnie sadly said, pushing his uneaten fries toward her.

Email ThisBlogThis!Share to TwitterShare to FacebookShare to Pinterest
Labels: bring it bitch