Chapter 243: All about Love 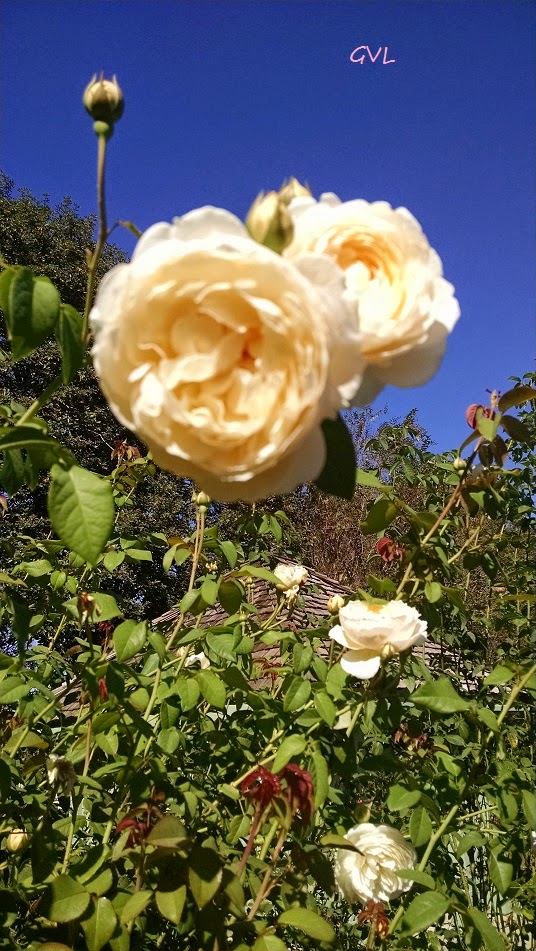 Sophie watched Ronnie leave her room, shaking her head in wonder. “That guy's gonna drive me crazy...especially if he keeps saying stuff like that and walking away from me,” she muttered.

She ran out chasing him down the stairs, determined to make him like her. When she found him, he was opening up an ornament box. He looked up and smiled.

“I swear Violet is awesome! She's so much like my dad it ain't even funny,” he said, pulling out a small form ball partly covered in red sparkles with a green satin ribbon tied to the top and the photo of a ten year old Sophie glued to the center. “My dad still has the one I made in art class, too. Aren't parents funny?”

“Yup,” he said, grinning. He turned back to the box and looked at all of the silly kid crafts Sophie had made for her mother, starting in Kindergarten all the way through the sixth grade. He could see her growing up before his eyes as each one had a goofy school photo of her glued onto it. He wished he had known her then.

“Ronnie, I didn't mean to make you feel like less of a guy when I grabbed the box and I didn't want to prove anything. I just didn't want you to think I was a weak and helpless thing. I know you and Simon think I'm an idiot for not seeing Antoine for the asshole he is. Believe me, I never felt so stupid when you told me what he'd been doing to those other girls...plus helpless and weak. I should have seen it before this, but I was blind and very dumb.”

“It is what it is. No worries,” he said, shrugging.

“I just wanted you to know I don't hate you and I won't ever hate you, no matter what you do,” she said. “You saved me from Antoine and I'll always be grateful for that.”

“Simon. You forget he was there too,” he said.

“Right, but if you hadn't pulled me onto the stage...it was really you, Ronnie. So, thank you. I just really wish you wouldn't hate me. I definitely don't want you to hate me.”

“Sophie, don't worry about it,” he said. “Even if you don't like the idea, I know my dad and your mom will get married and then...well, I already consider you family and...I don't ever hate family...even Simon.”

She wasn't too happy about that, she being his sister, but he was awfully nice to Georgiana—she saw it first hand how much he dotes on her-- would it be so bad to have him do that to her? No and at least he didn't hate her. She'd take what she could get...for now.

They both jumped again.

“Dude!” Ronnie shouted angrily. “What did I tell ya about that?”

“I wish he would stop doing that!” Sophie said through clenched teeth.

“Sneaking up on us, like he's hoping to catch us...I dunno...killing somebody?” Sophie said.

“As you can see, we're not killing anything,” Ronnie said.

“Then what's all this?” Simon asked, indicating the boxes.

“What's it look like?” Sophie said. “My mom wants us to decorate the Christmas trees, so...”

“Ooh, how fun! Can we help?” Cassandra said.

“You really want to?” Simon said.

“Hey, there's two trees so you can do one and we do this one,” Sophie said.

“We can make it a contest!” Cassandra said, gleefully.

“Well, if you put it that way, I'm all in. We'll beat the pants off these two,”Simon said, smirking.

“Seriously?” Sophie said. “Must everything be a competition for you?”

Ronnie leaned over and whispered in Sophie's ear. “Overachievers, the both of them. Nothing's fun unless they get some stupid imaginary prize. Don't sweat it, just let them think we're all in and they'll be happy.”

“What were you whispering to her?” Simon asked.

Ronnie shrugged. “You're fairest of them all, so...make up some rules.”

“You make her sound like Cinderella,” Sophie said, making a face.

“Snow White,” Ronnie said, shaking his head. “You really need to brush up on your Disney Princesses.”

She burst out laughing. “Yeah, sure. That's very important after all.”

“Are you guys done being stupid?” Simon said, irritably.

“Do we split the ornaments?” Cassandra said stepping closer to the boxes, looking in them.

“Take what you want,” Ronnie said, snatching up the homemade ornaments, both Kenny's and Sophie's. “Except for these. There's enough lights and garland for ten trees in the other box so help yourself. We'll take whatever's left.”

“I thought you wanted to do some Christmas shopping,” Simon reminded her as he allowed her to stack several items in his out-stretched arms.

“We still can do that...just later after we're done,” she said.

“We're taking this Charlie Brown tree. You take the one in the family room,” Sophie said. “And may the best dressed tree win.”

“Wait, who's gonna be the judge?” Cassandra asked.

“We better not tell her it's a competition though,” Sophie said.

“I know my mom. She'll be all, “Oh, they're both lovely, I can't pick just one.” But if we tell her we all did them together and just made different themes for each tree then maybe she'll pick one over the other. Mom never likes to hurt anybody's feelings.”

Ronnie and Sophie stepped back as the other two grabbed everything they could carry and run off to the next room.

“There's something really wrong with those two, taking this so serious. I hate to say it but I think they might deserve each other,” Ronnie said. “Poor Cassie.”

“Don't worry about them. Help me untangle this mess. Figures they would take the lights that were all neat and leave us with this,” Sophie grumbled.

Together they untangled the lights, strung them up together after testing them to make sure they worked and they draped them over the branches. All the while, Sophie peppered Ronnie with questions about his new siblings just to keep him talking while her own mind churned with ideas on how to make him fall madly in love with her, and barring that, at least lust for her. He couldn't possibly be immune to her charms forever, she figured....unless he was going for saint status, which she very much doubted was the case.

When they got around to placing the school-made ornaments on the tree, Ronnie was acutely aware Sophie was staring at him and he was trying desperately to not look too much at her, but she was driving him to distraction. She was gorgeous and seemed to like getting as close to him as possible. Any other time and with any other girl he wouldn't have minded, but she wasn't any other girl. She was very nearly family. If he didn't know better he'd think she was purposely trying to make it extremely difficult for him to see her as a future step-sister and nothing more.

“What?” he finally asked, as they placed the ornaments on the branches.

“What what?” she returned, going for innocent and failing. Why could her mother pull it off so well and she never could?

“You know perfectly well why, young lady,” Richard whispered in her ear. “Your mother is an innocent and you are merely acting.”

“Why are you staring at me? Got ketchup on my face or something?” he asked.

She laughed and shook her head. “No, nothing like that. I was just thinking and...well, you're cute, is all...very cute.”

He waited until he had secured the angel at the top of the tree before he glanced briefly at her. “You're not so bad yourself,” he mumbled.

“You're really good with the compliments, aren't you?” she said.

He laughed. “You fishing for compliments for any particular reason?” he asked.

“I'm not fishing for compliments at all. I just stated the obvious and you felt the need to return the sentiment, but no one asked you to,” she said.

“Would you believe me if I said you were gorgeous, beautiful and stunning?” he asked, keeping his eyes on the tree.

“Sure, you wouldn't be the first one to say it,” she said, carelessly.

“And you don't sound at all conceited,” he teased.

She shrugged. “We're both good looking and it's nothing we did. It's genetic and the luck of the draw. I could just as easily have been born butt-ugly and I'm sure there are tons of guys that would say I am ugly. In the eye of the beholder, you know,” she said.

She laughed and stepped back to look at the tree from a distance then she made a face.

“What?” he asked, stepping next to her and looking at it too. “Don't like it?”

“It's a tree only a mother would love...my mother in particular. Why she keeps these silly ornaments is anyone's guess.”

“You said it. It's all about love. I like it!” he said. “Gives me an idea. I'll get Peter and Georgiana and Julian to make a bunch of ornaments like these and we'll put them on a small table top size tree for my dad's bedroom. He'll love it.”

“He's that sentimental then?”

She shook her head. “Not much.”

“I guess...unless we use more garland or something,” she said, unconvinced.

“It's fine,” he said. “Wanna go see how Simon and Cassie are doing?”

He laughed and grabbed her hand, pulling her with him anyway.

Email ThisBlogThis!Share to TwitterShare to FacebookShare to Pinterest
Labels: All about Love