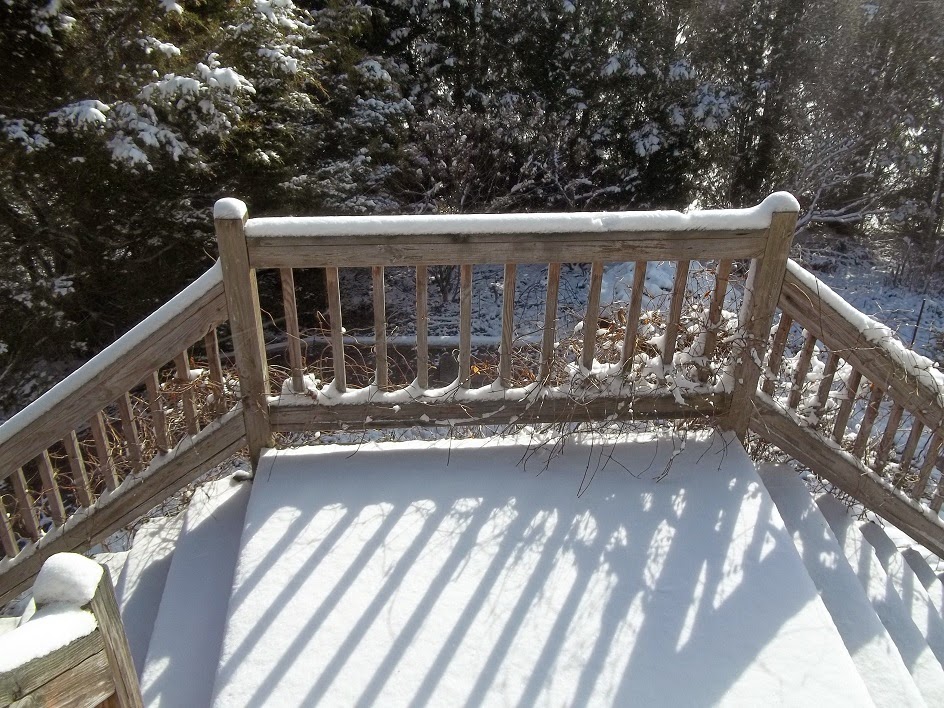 Violet had been rummaging through her cluttered medicine cabinet in the downstairs powder room and finding no aspirin there she went upstairs to look in her own bathroom. She found them and took the bottle to the kitchen where upon entering and seeing Simon and Cassandra kissing, she abruptly stopped at the doorway. Not willing to interrupt what she would later call the Nightingale syndrome in action, she tiptoed backward back into the hall and that's when she heard the squeals of delight coming from the living room.

“What is that about?” she muttered. She followed the sound and gasped. “Marty! What are you doing here? And Mr. Kramer, it's so nice to see you again.”

“Now, Missy, what have I told you about that Mr. Kramer stuff?” Morris said, irritably.

She laughed and shook her head. “I'm sorry...Morris, but it's hard to break a childhood habit,” she said, kissing his wrinkled cheek. “Have you two had breakfast?”

“Of course. We've been up for hours,” he said. “Nearly time for a nap for me and the old girl.”

He winked at Violet. “I like teasing her,” he whispered.

“I see that,” Violet said, giggling.

“Now, we have a big day ahead of us and we should get going,” Marty was saying to the kids.

“Where we going?” Julian asked.

“The garden? Gramma, there's two feet of snow out there covering it all,” Ronnie said.

“There is no snow in the conservatory which is bright and warm and full of flowers and fun activities just for kids today,” Marty said.

“Oh, how wonderful!” Violet said. “I'll see you all there today. I'm in charge of all that, you know. We have tons of fun activities planned at the indoor children's garden and we'll be decorating trees and...oh, pity you can't come later tonight for the Christmas concert.”

“Oh, but we will be, Missy,” Morris said, sticking his hand in his inside pocket to withdraw two tickets. “Pays to be a patron. Got my two tickets sent to me last month, 'course, we'll need to get some for the kiddos while we're there, assuming they have any left.”

“Oh, I can get them for you,” Violet said. “I'll have them saved at the door for you. Just three you need?”

“What about me?” Sophie chimed in, huffily. “I'd like to come, too. Don't know why you didn't think I would, Mom.”

“Well...it's not your kind of music. There will be a bell choir, and a children's choir plus the Brandywine Harp Society is coming all the way from Pennsylvania. Victor took me to see them last winter and they were wonderful!”

“He did? The little sneak! He didn't tell me, but that was before we all met, wasn't it?” Marty said, smiling. “And he was keeping you his little secret then, wasn't he?”

“Yes, something like that,” Violet said, blushing slightly. “So, that'll be...” She counted on her fingers. “Six, if Simon comes?”

“Where am I coming?” Simon said walking into the living room just then, his eyes opening wide. “Grandma, Grandpa, funny seeing you here. Violet's house is turning into Grand Central.”

“Good morning, Simon, dear!” Marty said. “Weston Botanical is putting on their annual Christmas concert tonight and we're all going. Will you join us?”

“Seriously? You think you're going on a date with Cassie?” Sophie said, rolling her eyes. “Did you bother to ask her while she was awake and...not high?”

“She is awake now and thoroughly sober. She just went back upstairs to shower and dress. First we plan on going to see her brother and father to assure them she is well and then...we'll spend the day together. She says she needs to do some last minute Christmas shopping and being she shouldn't drive just yet because she's still feeling a bit wobbly... I volunteered to take her.”

Ronnie and Sophie gaped open-mouthed, but Violet was happy as a lark about this, as was Marty.

“Oh, that's wonderful, Simon!” Marty said. “I hope we all get to meet your little friend.”

“You shall,” Simon said, smugly.

“ I think you and she will get along perfectly. She wants to be  a doctor too, you know,” Violet said.

It was Simon's turn to be stunned. “She does?” he said.

“I'm sure she'll tell you all about it today. So, that makes seven tickets all together. Oh, it's going to be lovely seeing you all there tonight!” Violet gushed. “Now, if you'll excuse me, I need to get ready for work and I should see if Cassie needs anything upstairs.”

While Violet and the kids said their goodbyes while suiting up for the trip outside, Ronnie took his brother aside to bring him back down to earth.

“Dude, you do know Cassie's brother's not gonna let you near her, right?” Ronnie said.

“Don't be ridiculous. I'm not the one who drugged her and he knows it,” Simon said, confidently. “He'll be grateful she's no longer in danger.”

“Simon, I'm telling ya, it's not that easy. She told me her brother gave her a hard time about having me for her lab partner in biology. Her lab partner! All we did was dissect frogs together and he had a problem with it.”

So did Sophie. “Wait...she never told me you were her lab partner!” Sophie said.

“Does she tell you everything?” Ronnie retorted.

“Obviously not,” Simon interjected. “That all may be true, but that was years ago. I think Cassandra may have a say in who she sees now that she's older and out of high school.”

“No, she does not! Ronnie's right, Simon,” Sophie said shaking her head. “You saw Frankie last night, but you don't know the half of it. They treat her like spun glass, they have her whole life cuz she was born premature and she very nearly died and she was very sickly for many years after. To this day, they protect her like nothing in this world. She goes nowhere without someone they know and trust going with her. The only reason he allowed her to go with you yesterday was because of me, so...there is no way in hell he'd allow her to go anywhere with you alone.”

Sophie suddenly grinned and looked at Ronnie. “Unless...”

“Unless Simon is extra nice to me,” she said.

“Excuse me?”Simon said. “What do you have to do with this?”

She shrugged. “I could talk to Frankie ...I could say all sorts of things...could go either way depending what I say,” Sophie said. “Frankie loves me...got him wrapped around my finger and I could make him do whatever I want. And well...he might be okay with you hanging with me and Cassie...maybe... if I say the right things about you...if...”

Simon stared at her, furious. Was this little git actually expecting him to bow down to her extortion at her whim in exchange for...Cassandra?

“Ronnie and I would make awesome chaperones for you...dontcha think? If you're nice to me that is...I just don't know if you can be,” Sophie said. “What do you think, Ronnie? Is your brother good enough for Cassie? I'm not so sure, you know, cuz he's so mean to me and all.”

Simon stood with clenched fists, impotent with rage. Of all the indignities... he had to beg Sophie to be his go-between and now his own brother was in on this power trip? Perhaps Cassandra wasn't worth the trouble, but even as he thought this, he knew she was.

Sophie laughed at the indignant expression on Simon's face. She so loved having Simon by the...uh...let's call them huevos, shall we?