Ch200 Dinner and an art show 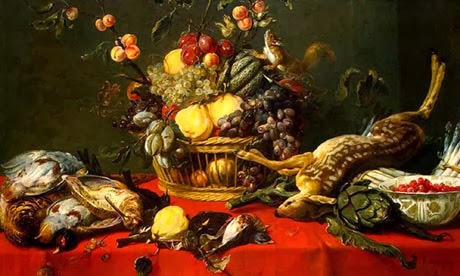 Still Life With Fruit and Game, by the 17th-century artist Frans Snyders


Rick did a double take. He stared at the couple on the patio for a minute, smirked, then closed the door and went back to the dining room where his friends were already seating themselves at one end of the massive teakwood table.

“You guys ready for something unexpected and pretty interesting?” he said, coming into the dining room and sitting down across from Sophie with that smirk still on his face.

“Like what?” Danny asked, reaching for a warm roll from the basket a footman had only just placed on the table in front of him. He didn’t get within an inch of them, however, before he got his hand slapped back by Sophie.

“Wait until we’re all here,” she said, placing her napkin on her lap. “What were you saying Ricky?”

“I just saw your mom coming real close to kissing Bug’s dad, or smacking him…couldn’t tell which, so… you two might be family one day…maybe,” he remarked grinning at them.

“Really?” Sophie said, her eyes wide as saucers, then giggling into her hands. “That would be so cool! My mom’s like… she’s been a zombie since my dad died and…well, she can’t be alone forever. She needs to be loved. Wouldn’t it be nice if…”

She glanced at Bug and her smile faded. “Bug, what is it? Don’t want a step-mom or maybe you don’t think I’d be a good little sister for you if… you know… our parents got together?”

Bug forced a smile. “I wouldn’t mind that. Your mom’s great and I never liked being an only child, but I wouldn’t wish a romance with my father on your mom. She’s much too good for him. He’d just break her heart. Hate to see her get hurt. She’s too nice for that,” he said, frowning.

“I’m sure your dad isn’t nearly as bad as you make him out to be,” she said.

“He’s worse,” he muttered, just as Violet came in all rosy cheeked and smiling a bit too brightly. Then she gasped and stared about the room, turning on the spot until she came full circle.

“Wow,” she mumbled, gaping at the enormous chandelier hanging over the table, then shifting her gaze to the vibrantly hand-painted wallpaper, the crown molding, the wainscoting and lastly the huge painting of fruit, wild game and flowers adorning one wall.

She frowned as she approached the painting. She remembered seeing one very like this, though she couldn’t recall where. Then her eyes followed the line of the other, smaller paintings of similar subjects, bunches of grapes, bowls of lemons, dishes of cheese, plates of canapés and vases full of brightly colored blossoms. Each one was fascinating, rich in color, full of movement and life, as if the inanimate subjects could simply pop out of the canvas fully formed.

“Who in their right mind would call this a still life?” she whispered to herself.

“I often wondered the same thing.” Laurence had sidled beside her, smiling wistfully up at the largest painting, his hands clasped behind his back. He then followed Violet around the room as she took a turn at each painting.

“Mom, are you okay?” Sophie said, curiously watching her mother and Laurence move about the room as if they were in a museum.

“Gees, Mom…Mr. Jeffries wants to serve dinner before it gets cold and you’re not exactly helping walking around like this is a museum when you should be sitting down,” Sophie said, giving the butler an apologetic look.

“Oh…sorry,” Violet said, taking a final glance at the painting before moving to the seat the footman held out for her.

Email ThisBlogThis!Share to TwitterShare to FacebookShare to Pinterest
Labels: Dinner and an art show