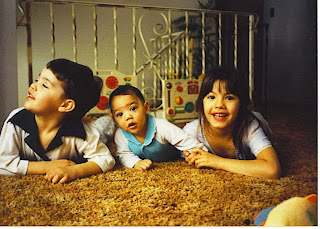 “Really, Victor, I can do it myself,” Violet said half-heartedly as she leaned heavily on the counter.
“Go sit down before you hurt yourself,” he said. “Marion gave me detailed instructions even a kindergartener can follow. I think I can handle this.” He then proceeded to make an excess of noise as he searched the cabinet beside the stove for the appropriate pot.
“Says the man who once took an hour to peel an onion,” she muttered, grabbing a paring knife, a cutting board and breaking off a piece of the ginger root before sitting at the kitchen table. She peeled the thin, papery skin off all the while watching Victor finally find the pot and then fill it with water and set it on the stove to the lowest setting.
“Victor, it’ll boil sometime next week if you leave it on low. How about putting it on high, why don’t you?” she said, now chopping the ginger.

Email ThisBlogThis!Share to TwitterShare to FacebookShare to Pinterest
Labels: Do it myself