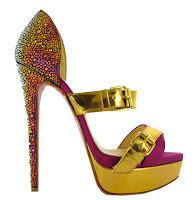 “I am not wearing hooker shoes!” Violet shouted, putting back on her own, old-fashioned and reasonable sling-backs with the mid-sized heel.

"But they're Louis Vuitton," The sales girl said.

“I don’t care. I’m not stupid enough to break my neck for fashion. I’ll stay safely out of style, thank you very much!” she snapped, raising out of the chair and going to the door where she stood with her arm tightly crossed over her heaving chest.

Victor gave the shocked shopkeeper an apologetic smile and followed Violet. He held the door open for her and she stormed out without a backward glance.

“Violet, what’s wrong?” he said, wrapping her in his strong arms.

“Obviously, but why? It’s not like I can’t afford to…”

“It makes me feel like…like Jane Eyre,” she said, her voice muffled against his chest.

“I’m sorry, you lost me. Wasn’t she an orphan who became a governess?”

“And she fell for the rich man who wanted to drape her with silks, satins, and jewels so he could possess her body and soul and like Jane, I don’t want to be bought!” she said pushing roughly away from him.

He gaped. “You think I’m trying to buy your affections?”

“Aren’t you?” she spat back. “You’ve been doing it from the start and I put up with it for Lord knows what reason. Well, I’ve had enough.”

“Nor I,” Heidi said. “Violet is a strange woman indeed if she… well…”

She pointed to Victor who looked ready to concede defeat.

“Shall I take you home now and forget about my birthday all together or wait until morning?” he tersely asked.

Violet stared up at him instantly regretting losing her temper. “Victor…I didn’t mean…”

“I think you did,” he said, grabbing her hand and leading her down the sidewalk at a brisk pace--so brisk, in fact, that she had to trot by his side to keep up.

“Too late,” he said. “You broke your promise. It was the only thing I wanted for my birthday. The only thing I ever asked of you and you couldn’t do it for me. Well, thanks for nothing…friend.”

“Amounts to the same, even if that wasn’t his intent. Look at her face,” Richard said grinning. “I could get anything I wanted when I saw that face.”

Heidi glared at him. “And I’m certain you took advantage of it.”

“Hell yeah! I ain’t stupid. Let’s hope your son isn’t either,” he replied.

The male shout stopped him in his tracks. He turned and smiled.

“Bret, hey man, how ya doing?” Victor said as the man came up to him and threw his arms about him for a fierce hug pounding his back with enough force to cause bruising.

“God, it’s great to see you. It’s been so long,” Bret said grinning broadly. “Eliza and I were just wondering if we’d ever see you again. She’s somewhere…in one of these shops and she’ll kill me if I…oh…” Bret said, spotting Violet. “Is this…? It is! This is the fiancé you told Eliza about.”

Violet’s eyes widened in shock. Was everyone in New York to believe they were engaged?

“Yes, Bret,” Victor said, giving Violet that pleading please-don’t -let-on-look. "This is Violet Bennet, the love of my life.”

“It’s great to meet you, Violet. Eliza has been dying to meet you,” Bret said, enthusiastically shaking her hand.

“She has?” Violet squeaked.

“Oh, yeah! We’ve despaired all these years for poor Victor. No good woman to take care of him and all. She was desperately trying to hook him up with every eligible woman in New York... since his divorce. All this time she thought Victor was lying about you. She'll be thrilled to know you're real.”

Bret laughed. “He’s spoken so highly of you, I feel as if  I already know you. Eliza will kill me if I can’t convince you to have dinner with us tonight. How about it?” he said looking from on to the other.

“Thanks, Bret, We’d love to, but…” Victor started to say.

“It’s Victor’s birthday weekend and we have a special night planned,” Violet added.

Victor stared at her wondering if she was just saying that to get out of this dinner and meeting Eliza, but no. He was certain by that sweet smile and her glowing eyes that she meant they were not going back home, that she would stay and not ruin his birthday. Without thinking he gathered her into his arms and kissed her. “I love you,” he muttered against her lips and kissed her again.

“Uh, okay,” Bret said, laughing. “How about tomorrow then? You’ll be around, I hope? Eliza has to meet you or she’ll just die! That or she will continue to believe you don’t exist.”

“Not good enough for her. We can throw together a little birthday bash with some of your old friends, Victor. Please, don’t say no.” Bret said.

“We’re going to All that Jazz tonight. You and Eliza can meet us there. We can have a few drinks, listen to good music, but no big party,” Victor said.

“She’ll love that! We haven’t been there in ages,” Bret said, brimming with excitement. “I better go find her and tell her the news. She’ll be stunned! Catch ya later.”

They watched him bounce down the street checking each shop window, until he found his wife and he went inside and out of sight. Then they turned and looked at each other.

“Kinda,” he replied, wondering if she was angry. She didn’t look it.

"That's the third person in New York who believes we're to be married."

He raised an eyebrow and waited. “I’m sorry. What do you need?”

She raised her left hand and wiggled her fingers at him. “Bret didn't notice, but I doubt Eliza will be fooled without something shiny to blind her,” Violet said, with a cute little smirk on her face.

Victor burst out laughing. "You're the best, Violet," he said, but he sobered as he took her hand and passed his thumb over her wedding ring. "But this would have to go... if we want to do this right."


She looked down at her hand, eyes focused on the ring she'd never taken off. She pressed her lips together staring at it until her vision blurred.


"It may be time anyway, Dear," Heidi whispered in her ear.


"It's only for a little while," Richard added.


Violet took a deep breath and hesitating only a second she tugged the ring off. She held it for a minute then looked up at Victor. "Will you hold this for a minute?"


He held his palm open to her and she gently placed the ring in the center. She then reached behind her neck and unclasped a long, thin gold chain she always wore with a tiny gold cross dangling from it. She then took the ring and slipped it onto the chain and refastened it around her neck. She then tucked the ring inside the bodice of her dress, away from sight.

"Are you all right?" Victor gently asked.

Stunned, he merely nodded then tucked her hand around his arm and started down the street. “Guess our next stop is…”

“Oh dear, not Tiffany’s?” she said with a grimace.

“No, I was thinking my apartment,” Victor replied.

“That’s where my mama’s jewelry box is containing her vintage engagement ring.”

“Victor, no! That must be beyond valuable and...I just meant a fake cubic zirconium thing, just to fool…”

“If you knew Eliza as I do, you’d know she can spot fake ten kilometers away. It’s the real deal or nothing,” Victor said, stopping in the middle of the sidewalk to look at her. “If it’s nothing then she’ll know I’ve been lying to her about you and she’ll start all over again.”

He put on a high pitched voice. “Oh, I know the perfect girl for you, Victor. She’s the second cousin of my sister’s hairdresser’s nephew’s girlfriend’s yoga instructor’s landlord’s accountant’s butcher.”

Violet stared in wide-eyed wonder then burst out laughing.

“If you like me even this much,” Victor said holding his thumb and forefinger an inch apart. “You won’t make me go through that ever again.”

“Well, then…to mama’s jewelry box we go,” Violet said and she was instantly swept off her feet and kissed soundly.

“I did not see that coming. Did you?” Richard said.

Staring in complete astonishment, Heidi shook her head. “I most certainly did not,”  she whispered.

Email ThisBlogThis!Share to TwitterShare to FacebookShare to Pinterest
Labels: From Hooker Shoes to Engagement Rings