Ch107 My Boyfriend, the Weatherman by Glory Lennon 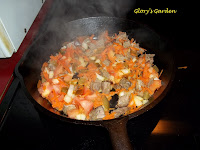 “Let me down, you beast, or the onions will burn,” Violet snapped.

Victor obeyed and set her down, but not before kissing her soundly.

“Victor Romanoff, you said no funny stuff,” she whispered, breathing heavy and trying halfheartedly to push him away.

“That was just a thank you. You give a better birthday show than Benihana’s. Their chefs aren’t nearly as sexy,” he said, smirking.

She blushed. “I wasn’t putting on a show for you. You should learn to knock!”

“What for? You never lock the door and you wouldn’t have heard me anyway with the music this loud.”

“I…I unlocked it to let Calendula out,” she lied.

Victor pointed to the fluffy ginger tail sticking out from under the table; proof she had done no such thing.

“Oh, shut up,” she snapped and turned back to cooking.

He smiled, grabbed a mug out of the cabinet and poured coffee into it. He then leaned against the counter drinking it and watching her as she worked.

“Stop staring. The show is over,” she said, irritably.

“I like looking at you even when you’re not dancing. You’re a pretty sight,” he said.

She blushed again. “Stop that. You wouldn’t say that to your mother, would you? You promised to treat me just like you would her.”

“I always told her how pretty she looked. It made her happy,” he said chuckling. “I remember my father calling her a vain old doll…when she wasn’t around, of course!”

Richard burst out laughing and got Heidi’s elbow in his side for his trouble. “What? That’s funny!” he said.

“Yes, well, that reminds me. I have no idea what to pack for this trip. Should I bring a nice dress or casual clothes or what?” she asked, pulling out of the oven the most heavenly scented muffins in existence.

“Violet, how many of those do you think I can eat?” Victor said, counting two dozen regular sized ones and a tray of same number of mini-muffins.

“I’ve seen you polish off three in one sitting and that’s after a huge stack of pancakes or eggs or whatever. You can have as many as you wish and the rest are going to the littlest angels.” She stopped and anxiously stared at him. “You don’t mind stopping there first, I hope. It’s on the way.”

She smiled and set the trays to cool while she slipped the omelet onto a plate and placed it in front of him. “So, tell me what to pack.”

“I have to get dressed and pack. I can do that while you eat.”

“What kind of birthday breakfast would it be without you sitting beside me? Come eat,” he said, holding the chair out for her.

She rolled her eyes and grabbed a muffin.

“This is wonderful, Violet. Thank you,” he said.

“You didn’t even taste it yet.”

“I don’t have to. Everything you do is the best,” he replied, picking up her hand and kissing it.

She glared at him. “Did you used to do that with your mother, too?”

He grinned and grabbed his fork. “Yes, I did. She liked it. Made her feel loved.”

Violet’s heart suddenly felt too big for her chest. What was she going to do with this man?

“I have some suggestions, but I believe your own imagination will work things out for you,” Heidi whispered in her ear.

“So, um…what should I…” she said, just as the phone rang. “Wow, who could be calling so early?”

“I already got two phone calls from my boys wishing me a happy birthday,” Victor replied just as she got up to answer it.

“Well, it’s not my birthday, now is it?” she said putting the phone to her ear. "Hello?"

“Oh, Sophie!” Violet said, frantically waving for Victor to shush. ”Hi, Sweetie, it’s so long since I heard from you!”

“Someone there with you?” Sophie asked.
“Uh…goodness, no, that’s the…uh, radio,” Violet lied as she turned down the CD player.

“Oh, leave that on. Love that song,” Victor said.

Violet glared at him.

“There he was again. Mom, you got a boyfriend? That’s awesome!”

“Heaven’s no! How could you think of such a thing?”

“Easy, you’re sexy hot…even for a mom. Everyone says it,” Sophie said, unable nor even trying to get the amusement out of her voice. “I heard you were this close to going out with John Yearly. That true?”

“Not what I heard. You and he were cozy while manning the baking booth at the carnival,” Sophie teased.

“Who would say such a vicious lie?” Violet shrieked.

“Who are you talking to, me or your boyfriend?” Sophie said, giggling.

“It’s not…it’s…it’s the weather guy on TV,” Violet said, covering up the mouth piece and mouthing the words, “It’s my daughter, now be quiet!”

“Wow, didn’t know he worked the weekends. But, you know Jocelyn won’t like that. You know how ticked she is with all them white women taking her men.”

“Oh, Mom, lighten up. I’m just teasing ya,” Sophie said. “If you did have a boyfriend, he wouldn’t be there this early…unless he spent the night…”

“No one spent the night…ever!”

“You forget the night of the blizzard when Missy and Karen…” Victor stopped at the quailing expression on her face and resumed eating.

“Well, I better leave you and Al alone before it gets too… stormy,” Sophie said.

“But…but what did you call about?” Violet quickly asked.

“Oh, yeah…I can’t come home at all this summer.”

“You’ll never guess what happened. We have a major gig in Orlando! I’m so excited…and a little bit nervous. We’re going to be there for two weeks! I wanted to tell you so you didn’t worry, cuz I’m not sure I can call much. Sorry.”

“Oh, well…can’t you come home before classes start up again?”

“No, that’s just it. We’ll be done only just in time to get back to classes. So, I was thinking you should come here for Thanksgiving. Please?”

Victor stared at her horrified.

“Yes, Mom, they celebrate it here too, you know. We’re planning a huge party with all our families. Please, think about it? Kenny already said he and Janice will be spending it with her parents. So, there’s no reason for you to stay in New York.”

“Great!” Sophie said. “Anyway, I gotta get going and so do you. Can’t keep Al waiting.”

“Your weatherman boyfriend, of course. Love you, Mom!”

Email ThisBlogThis!Share to TwitterShare to FacebookShare to Pinterest
Labels: My Boyfriend, the Weatherman