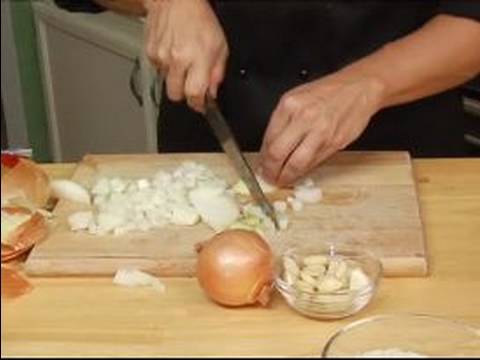 “Oh, will you go sit down!” Violet shouted in exasperation after she bumped into Victor for the umpteenth time. He was more of a nuisance to her in the kitchen than anything else. “Now I know why you say you have the fire department on speed dial. You are a danger to yourself anywhere near a stove!”

“I did warn you,” he said hovering around her. Bumping into him was annoying her, he knew, but he couldn’t have been happier.  Who wouldn’t want that pretty little body running into them?

“There must be something I can do that won’t cause a catastrophe,” he said while looking over her shoulder as she browned the beef.

“I’m not sure I can trust you not to hurt yourself,” she muttered, exasperated.

“Try me. I may surprise you,” he said in her ear causing a ripple to go down her spine. She wished he wouldn’t do that.

“Okay, can you slice some onions? Without killing yourself, I mean?” She took out a cutting board, a knife and two large onions and placed them at the far end of the counter, well away from her, so she could have some breathing room. She glanced at him with a worried expression before handing the knife to him.

“I’ve been told I have a killer smile, so I don’t need to use a knife for murdering,” he said with a smirk.

This was the first time  he had incorrectly interpreting her thoughts. It cheered her substantially, though she wasn’t about to tell him that. “I’m sure,” she said with a haughty tilt of her head.

He laughed. “Haven’t you ever heard that you shouldn’t bite the hand that feeds you? I wouldn’t harm a single hair on your pretty little head if it meant I couldn’t have your beef Stroganoff. I ain’t stupid, you know,” he said nodding for emphasis.

“I realize you’re not stupid, but I’m not sure I have enough bandages for all the damage you could inflict on yourself. It is two onions I need diced.  I really don’t want to spend all night in the emergency room so be careful. Do you hear me?” she said severely.

“Yes, ma’am, I’ll try,” he said. Before she turned away he placing his hands on her arms and smiled down at her. “Thank you for doing this, Violet. You’re rapidly becoming my best friend.”

She suddenly blushed and wished she hadn’t agreed to any of this. He was making funny things happen inside her which frightened her. “Why don’t you wait to thank me after you taste it. I might poison you or something.”

She stepped away from him as he chuckled. Her eyes fell on the stack of mail next to her purse on the counter she noticed the movies from the video store just sticking out from underneath. “Where did these come from?” she asked.

“From your mailbox,” he replied as he painstakingly peeled the onion. You'd think he was doing brain surgery.

“The movies, I mean, silly man,”she uttered getting annoy again. Would she ever not be irritated by this man?

“I thought we could watch them later. I never saw them before,” Victor told her as he continued with the uncooperative onion which keep slipping in his hands. Give him stacks of papers to read through, give him a hostile witness to break and he was fine but slicing and dicing? That was definitely not his strong suit. He usually hired people to do that sort of thing.

“You went through my car?” she asked, indignant.

Startled, he looked up. “Of course not. I just saw them out in the open and I didn’t want the mechanic to toss them out.”

She groaned completely forgetting  about the DVDs. He was taking forever just peeling the stupid onions. How long would it take him to slice them? Until the next ice age probably. Well, she couldn’t wait that long! After stirring the meat she grabbed another knife and grabbed the onion out of his hand. She then diced it with a speed that scared him.

She took the other onion and had that one peeled and diced before Victor could say anything. He stared in stunned silence.

“Bit of a show-off, aren’t you?” he said frowning at her.

“Well, if you want to eat some time this century you’re just going to have to step aside,” she told him as she finished up and took the cutting board to the stove tossing the diced onions in and giving the mixture a stir.

“Are you sure you’re not a knife-welding murderess?” he asked sounding in awe.

“I may not have a killer smile like you do but I did tell you about my ‘To-die-for’ cookies. Does that count?” she asked looking over her shoulder with a smile that could very well kill him.

“I think you have a very nice smile. You just don’t use it enough,” he said as he watched her stir the beef. “Man, that already smells great.”

He went to the stove standing right behind her and stuck his hand in to steal a piece of meat but she slapped it away. “Hey, I’m hungry!” he whined.

She laughed.“Would you still like to help me?” she asked. She relented and allowed him a taste.

He couldn’t answer. He was too busy  savoring the wonderful favors with his eyes closed. He mumbled, “I think I’m in love.”

She froze staring up at him. He opened his eyes, took one look at her expression and quickly added. “Did it again, huh?  I can’t  fall in love with food, can I? But I sure like it a lot!” he said brightly. “So, what do you want me to do?”

Violet realized she had been holding her breath and her heart drummed so hard against her ribs she thought it might just fail her. She turned away from him and rummaged through a cabinet all the while willing her heart to go back to a normal pattern, but how likely was that with Victor so near?

She found the colander, dumped the mushrooms in it and splashed water on them. “I’m washing these. Your mission, if you choose to accept it, is to slice these. Do you think you can handle that?” she asked sounding, if not exactly feeling, stern.

She shook the excess water off the mushrooms and suddenly turned away from the sink. She collided with Victor who, of course, stood  right behind her. Startled she almost dropped the colander, mushrooms and all.

He grabbed them before they fell. “Sorry,” he said sheepishly.

“I swear, Victor....”  She jerked the mushrooms away from him and held her hand over her wildly thudding heart. Unfortunately, it still wouldn’t listen to her and it wouldn’t ever if he didn’t stop looking at her that way. “What?”she snapped

He smiled. “You’re the best, giving me a second chance after the onion debacle. An absolute sweetheart. So, I just slice these?  How?” he asked. She gave him a withering look. “What? I really don’t know how you want them. I’m clueless in the kitchen or haven’t you noticed.”

Against her will she laughed then proceeded to show him precisely how to do it. He nodded and said “I can do that...I think.”

She watched him as he once again took up the knife and grabbed a big fat mushroom as if it were a cobra ready to strike.  She covered her mouth to keep from laughing and forced herself not to help this time. He said he wanted a cooking lesson. Well, this was the only way to learn, by doing.

“I’m going to tell all my friends about you, Violet,” he suddenly said as he cut the mushroom in  thick slices.


She grimaced but let it go. They were just mushrooms after all and they would likely taste the same whichever way they were sliced. Then his comment finally sunk in startling her. “And what exactly will you be telling these friends about me?” she asked angrily.

He looked up from his knife with an almost naive look on his face. “That I found a true-to-life angel on earth. They’ll never believe me. Most of my friends think women are evil.”  He shrugged and went back to the slicing.

“Why would they think that?” she asked in dismay.

“A lot of them are divorced and got taken to the cleaners.”

Divorce again! Oh, how she hated that word. “I never understood that. People that used to love each other suddenly at each other’s throats and for what? Their grandmother’s china that no one cared about before the break up? It makes me sick,” she grumbled grabbing the second knife and savagely slicing along with him.

She suddenly glanced up at him.  “Did you get taken to the cleaners, too?” she asked tentatively.

He smiled and shook his head. “No, we actually had a rather civilized divorce, if there is such a thing. I guess it was to make up for the less than civilized marriage. My ex could have gotten alimony. I would have paid it willingly but Marty told her if she did such an unconscionable thing that she would disinherit her,” he said looking wistful for a minute.

Violet’s eyes popped open in shock. “Your mother-in-law sided with you?” she asked incredulous. “Is that allowed?”

He laughed. “It wouldn’t matter if it’s allowed or not. Marty would do it without hesitation. She’s unconventional, a real tough cookie. She’s great. You’d love her. I know I do. Still send her mother’s day cards and presents for her birthday and holidays. I’m pretty sure that annoys my ex, but there you go.”

“You do it just to get back at your ex-wife?” Violet asked sadly.

“No, of course not. I actually love Marty. She’s my sons’ only living grandparent, you know, and they adore her.”

She stared up at him with such a sad expression he thought she might start crying. Instead she said in a soft voice, “I don’t like divorce.”

“I know, you told me yesterday.”

He smiled at her and she smiled back. Things were looking up, he thought. Perhaps in a few weeks he could get her defenses totally down and he could start turning this budding friendship into what he truly wanted, ever-lasting love.

Posted by Glorygarden@msn.com at Monday, January 31, 2011